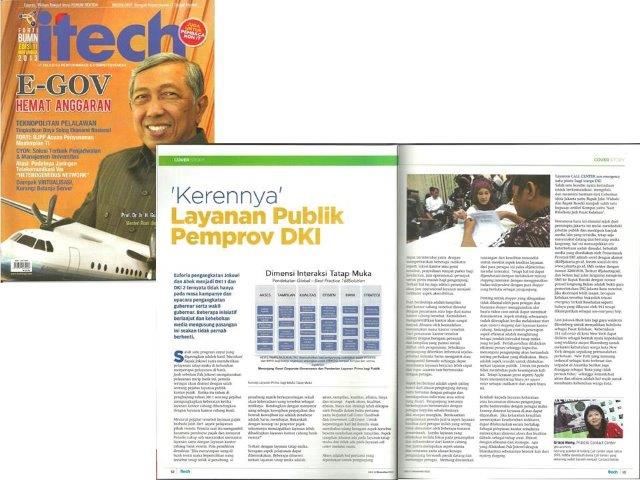 The phenomenon of Jokowi and Ahok euphoria for becoming the Jakarta Governor and Vice Governor continue post the appointment ceremony. Several ongoing initiatives and media frenzy carrying this couple seems never stopped. One of the new program is what we called 'blusukan' mean survey to the grass root of community without formality. Mr Jokowi as the Governer requested the service on kelurahan (municipality area) followin the bank services. Actually the concept of services customers using banking is not something new but it was unusual as it was introduce in the bureacracy institution. I do hope this is the beginning of the public services reformation for Jakarta citizens or so called ‘Jakarta Baru’ initiative.

The face to face services to administered Jakarta citizens

Long before Mr. Jokowi request this so called ‘banking services’ style of customer service, I recalled being in a hot discussion with a lady from Directorate General Taxes. It was back in Year 2011 and bottom line was her objection that Taxes service cannot and shouldnt follow the banking style service. My opinion is on the other side that Taxes service should have surpass the banking style service industry as when Taxes collect the fund it’s a regulation and people lost the ownership of the money while banking, the customer still own the money. Thats my point of view. With that in mind “Was not the tax payer should received more services compare to the private bank sector services?"

While with the face-to-face channel services, various dimension is the foundation of excellent services for face-to-face media. I am using the framework that comoonly use in Contact Center that specialized in face to face channel, they are : Accessibility (Speed), Appearance (look and feel), Quality, Efficiency, Cost and Strategic dimension.

Few face-to-face dimensions considering access, quality, efficient have pour out and discuss in my first book called ‘Call Center Call Center Handbook’ and later follow by the ‘Government Call Center’. For the purposes of better perspective, I like to discuss the various dimensions and its re- added dimension that is appearance. This dimension is specific related to face-to- face at the call center services via voice .

Accessibility category is the first thing that the visitors experience whenever they approach the office, such as signage for the location, parking space for vehicles, operating hours signage, entrance or exit door and waiting room for visitors. These all items are consider to express the easiness of visitor to find the entry or accessing the service provide.

The next dimension is the appearance of the outlet or branches or office starting with the naming or logo of the branch office. The easiness is the key on finding the office location. Beside the naming or signage of the office than it should be the calrity of instructions and appropriate display to be viewed by visitors. Visitors should be informed clearly where to queue or take a form or brochure for them to access specific services related to the reasons why they campe on the first place. By doing this will help the interaction deliver faster, smoother and on target time.

The next aspect is the key aspect of the reasons visitors come to the meeting with officers and get information or a solution is sought. Visitors certainly willing to interact with officers running as well as possible and as quickly as possible. Based on my the quality dimension usually forgot the the interaction with the officers aspect and this is actually the main reason why people come to the office or outlet. Especially in government sector of services, this aspect doesnt cover on the standard interaction. The service competition focus on appearance and infrastructure and just forget on the main aspects reasons why visitors come and interact with the staff. Indeed I found its challenging in monitoring and even assessing the interaction but its need to be done. This challenge can be bridged by doing mystery shopping using an independent agency with the unknown shopper who act as a visitor. Important for the shopper who is unknown by officers and typically use small video cam to document the interaction. If you implement mystery shopping than the Strategy Aspect define  in this category. While an examples of metrics under Efficiency dimension is the ‘number of face-to-face interactions’ handled during an hour. This ‘number per hour’ metrics will be increas along the  improvements are made. Cost is the most difficult aspect to measure in the public service sector. I wont address it on this occasion. But service outlets such as Apple Store monitor their cost per square meter as an indicator of the cost dimension.

Back to the Government Distric Service or so called Kelurahan or Kecamatan office, following the new Governance objectives where community (red: visitors) need to be serve during their interaction with the officers, these dimension can be use. It is advisable to implement them in stages, starting with Accessibility and Quality dimension first. Followed by Efficiency and strategic later on. What Mr. Jokowi done with his ‘blusukan’ actually is another form of mystery shopping.