I wanted to share this - people often ask what is Gen Y etc so here is a useful document from William J. Schroer - see details at the end 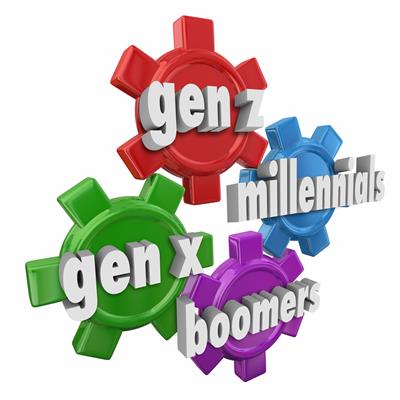 We often use phrases or words that we don’t fully understand. Sometimes we even use words or phrases the meanings of which we are totally clueless. As people with a passion for words and language, that is generally not viewed as a desirable trait. Yet, the plain fact is we can’t have a detailed understanding of every word or phrase...particularly when the word belongs to the jargon of a larger body of knowledge.

However, when that jargon is in use as often and frequently as the phrases “Gen X” or “Baby Boomer”, it seems especially important we have some reasonably good idea of what these terms actually mean. Although these phrases, as jargon, stem from the larger discipline of demographics, and are used most frequently by market researchers, the fact is everybody uses these words and phrases. In effect, these cue words or phrases for the subcomponents of society demarcated by age are not only useful, but are generally the language used by non-demographers and society as a whole when discussing the current spectrum of population cohorts.

Our goal, this month, then, is to provide a primer on the identification and description of the population cohorts in America as currently widely (but not universally) agreed upon by demographers and market researchers.

The Depression Era Born: 1912-1921
Coming of Age: 1930-1939
Age in 2004: 83 to 92
Current Population: 11-12 million (and declining rapidly)
Depression era individuals tend to be conservative, compulsive savers, maintain low debt and use more secure financial products like CDs versus stocks. These individuals tend to feel a responsibility to leave a legacy to their children. Tend to be patriotic, oriented toward work before pleasure, respect for authority, have a sense of moral obligation.

Boomers I or The Baby Boomers
Coming of Age: 1946-1963
Age in 2004: 59 to 76
Current Population: 41 million (declining)
This generation had significant opportunities in jobs and education as the War ended and a post-war economic boom struck America. However, the growth in Cold War tensions, the potential for nuclear war and other never before seen threats led to levels of discomfort and uncertainty throughout the generation. Members of this group value security, comfort, and familiar, known activities and environments.

Boomers I or The Baby Boomers Born: 1946-1954
Coming of Age: 1963-1972
Age in 2004: 50-58
Current Population: 33 million
For a long time the Baby Boomers were defined as those born between 1945 and 1964. That would make the generation huge (71 million) and encompass people who were 20 years apart in age. It didn’t compute to have those born in 1964 compared with those born in 1946. Life experiences were completely different. Attitudes, behaviors and society were vastly different. In effect, all the elements that help to define a cohort were violated by the broad span of years originally included in the concept of the Baby Boomers. The first Boomer segment is bounded by the Kennedy and Martin Luther King assassinations, the Civil Rights movements and the Vietnam War. Boomers I were in or protested the War. Boomers 2 or the Jones Generation missed the whole thing.

Boomers I had good economic opportunities and were largely optimistic about the potential for America and their own lives, the Vietnam War notwithstanding.

Boomers II or Generation Jones Born: 1955-1965
Coming of Age: 1973-1983
Age in 2004: 39 to 49
Current Population: 49 million
This first post-Watergate generation lost much of its trust in government and optimistic views the Boomers I maintained. Economic struggles including the oil embargo of 1979 reinforced a sense of “I’m out for me” and narcissism and a focus on self-help and skepticism over media and institutions is representative of attitudes of this cohort. While Boomers I had Vietnam, Boomers II had AIDS as part of their rites of passage. The youngest members of the Boomer II generation in fact did not have the benefits of the Boomer I class as many of the best jobs, opportunities, housing etc. were taken by the larger and earlier group. Both Gen X and Boomer II s suffer from this long shadow cast by Boomers I.

Generation X Born: 1966-1976
Coming of Age: 1988-1994
Age in 2004: 28 to 38
Current Population: 41 million
Sometimes referred to as the “lost” generation, this was the first generation of “latchkey” kids, exposed to lots of daycare and divorce. Known as the generation with the lowest voting participation rate of any generation, Gen Xers were quoted by Newsweek as “the generation that dropped out without ever turning on the news or tuning in to the social issues around them.”

Gen X is often characterized by high levels of skepticism, “what’s in it for me” attitudes and a reputation for some of the worst music to ever gain popularity. Now, moving into adulthood William Morrow (Generations) cited the childhood divorce of many Gen Xers as “one of the most decisive experiences influencing how Gen Xers will shape their own families”.

Gen Xers are arguably the best educated generation with 29% obtaining a bachelor’s degree or higher (6% higher than the previous cohort). And, with that education and a growing maturity they are starting to form families with a higher level of caution and pragmatism than their parents demonstrated. Concerns run high over avoiding broken homes, kids growing up without a parent around and financial planning.

Generation Y, Echo Boomers or Millenniums Born: 1977-1994
Coming of Age: 1998-2006
Age in 2004: 10 to 22
Current Population: 71 million
The largest cohort since the Baby Boomers, their high numbers reflect their births as that of their parent generation..the last of the Boomer Is and most of the Boomer II s. Gen Y kids are known as incredibly sophisticated, technology wise, immune to most traditional marketing and sales pitches...as they not only grew up with it all, they’ve seen it all and been exposed to it all since early childhood.

Gen Y members are much more racially and ethnically diverse and they are much more segmented as an audience aided by the rapid expansion in Cable TV channels, satellite radio, the Internet, e-zines, etc.

Gen Y are less brand loyal and the speed of the Internet has led the cohort to be similarly flexible and changing in its fashion, style consciousness and where and how it is communicated with.

Gen Y kids often raised in dual income or single parent families have been more involved in family purchases...everything from groceries to new cars. One in nine Gen Yers has a credit card co-signed by a parent.

Generation Z Born: 1995-2012
Coming of Age: 2013-2020
Age in 2004: 0-9
Current Population: 23 million and growing rapidly
While we don’t know much about Gen Z yet...we know a lot about the environment they are growing up in. This highly diverse environment will make the grade schools of the next generation the most diverse ever. Higher levels of technology will make significant inroads in academics allowing for customized instruction, data mining of student histories to enable pinpoint diagnostics and remediation or accelerated achievement opportunities.

Gen Z kids will grow up with a highly sophisticated media and computer environment and will be more Internet savvy and expert than their Gen Y forerunners. More to come on Gen Z...stay tuned.