Statistics of Business Process Outsourcing in the Philippines

This blog contains the important statistics pertaining to the business process outsourcing in the Philippines. The figures are compiled from publicly available information from various credible sources. As per Oxford business group, “the global BPO industry is forecasted to be worth $250bn by 2020 and the Philippines is seeking to cement its position as a preferred global service offshoring hub and expand on and diversify its share in this lucrative, yet highly competitive field. Having grown at a compound annual growth rate of around 10% over the past decade, the BPO sector has become the country’s largest source of private employment and the second-largest contributor of foreign exchange earnings after remittances. It has also fueled the growth of other sectors, as the salaries paid out have augmented household consumption and anchored the expansion of the property and retail sectors. Since 2004, the Philippines has tripled its global market share of BPO business, from 4% to 12.3% in 2014. It is estimated that this could rise to 19% by 2020” 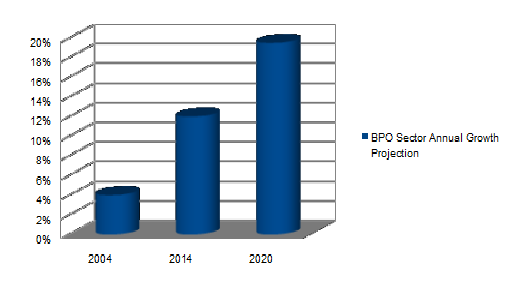 The BPO sector’s contribution to GDP has risen in tandem with the number of companies setting up operations in the country. The industry accounted for just 0.075% of GDP in 2000, rising swiftly to reach 2.4% in 2005, 4.9% in 2011, and 5.4% in 2012. Its estimated GDP contribution was 6% in 2015, with expectations that it could contribute up to 9% of GDP in 2016, according to the IT and Business Process Management (IT-BPM) Roadmap for 2012-16 published by the industry group IT and BPO Association of the Philippines (IBPAP).

A steady upward trend has continued in the industry’s record for revenue generation. According to industry analysts, revenue from the country’s BPO industry grew 10-fold from $1.55bn in 2004 to 15.5bn in 2013, reaching an estimated $18bn in 2014. In its IT-BPM Roadmap for 2012-16, the IBPAP forecasted that annual revenue from the IT-BPM industry could more than double from $9bn in 2010 to $25bn in 2016, a 10% share of the global market. Meanwhile, property consultancy CB Richard Ellis (CBRE) projects BPO revenue could double to $50bn by 2021, thus matching with the estimates of Oxford Business Group as indicated above.

Going from strength to strength, the BPO industry’s record for job creation has experienced a similar rise, from 101,000 employees in 2004 to 900,000 in 2013. Indeed, IBPAP projects that 372,000 new jobs will have been created in the BPO industry between 2014 and 2016 and has targeted an employment figure of 1.3m Filipinos by 2016. Furthermore, IBPAP estimates that the number of BPO employees could reach 3.3m in 15 years,

On a high level, the outsourcing industry is the single largest organized employer in the Philippines and is estimated to provide employment to 1.3 million workers as per 2016 figures. The World Bank and other industry experts forecasted a continuing bright future for the industry, with earnings projections that could reach $25 billion by 2016 (touching 1.5 million jobs) and $55 billion by the year 2020 .

To summarize the various projections, the industry is well poised to reach somewhere in the zone of US$ 50 -55 Bn in next five years and we can safely assume doubling of the work force from 1.3 to 2.6 Million on a conservative side. A huge ground has been covered and an equal opportunity or more lies ahead. Philippines has thus emerged as one of the top destinations for business process outsourcing. With its delivery center situated in Metro Manila