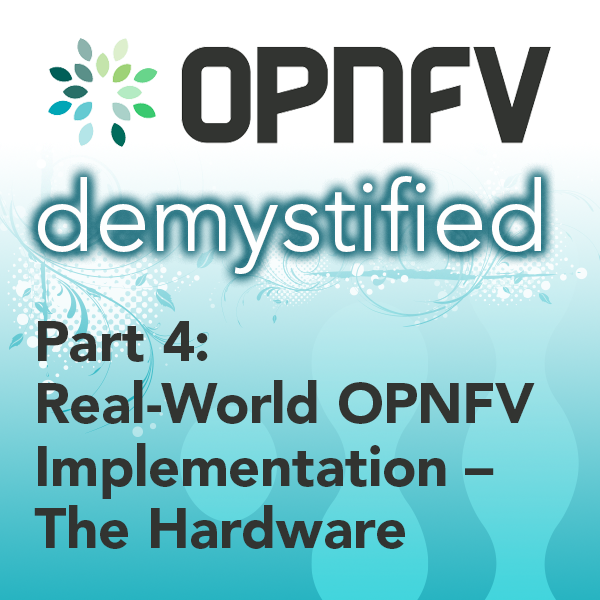 You may not have, as I did, the luxury of choosing the array of hardware – rack-mount servers (RMS) or Blade servers - to be used for your OPNFV implementation. I’m going to assume you’re not rolling in a rack full of blades, fiber switch fabric, and storage arrays, but have to make do with what you hope are adequate 1U or 2U machines. I’ll mention later some of the interesting twists encountered with a blade setup, but let’s start with RMS’s in the blog.

First, how many do you really need for a minimal but usable deployment? Yes, it is possible to do everything on a single large system by putting the various OpenStack nodes on virtual machines (often Oracle VBox). But, this leads to extra network configuration as what are normally physical NICs will now be virtual NICs. And, worse yet, the machine that will run your guest VMs will itself be a virtual machine. This added layer of virtualization will not be a pleasant thing.

In my mind, a set of 4 bare metal systems is needed for a minimal OPNFV deployment. This will give you a Fuel master node to deploy from and a place to park all of the necessary roles required for OPNFV. What you will lose is some speed because you have jammed several functions on the same system, and you will sacrifice redundancy/high availability. In addition, this configuration only provides a single compute node. So, this node should at least be a sizable system. My compute has 8 CPUs and 32 GB of memory – enough to start up at least a handful of guest VMs.

Let’s look at the overall picture of the deployment. Note that this shows only the RMS side of things, although the virtual Fuel machine is there. 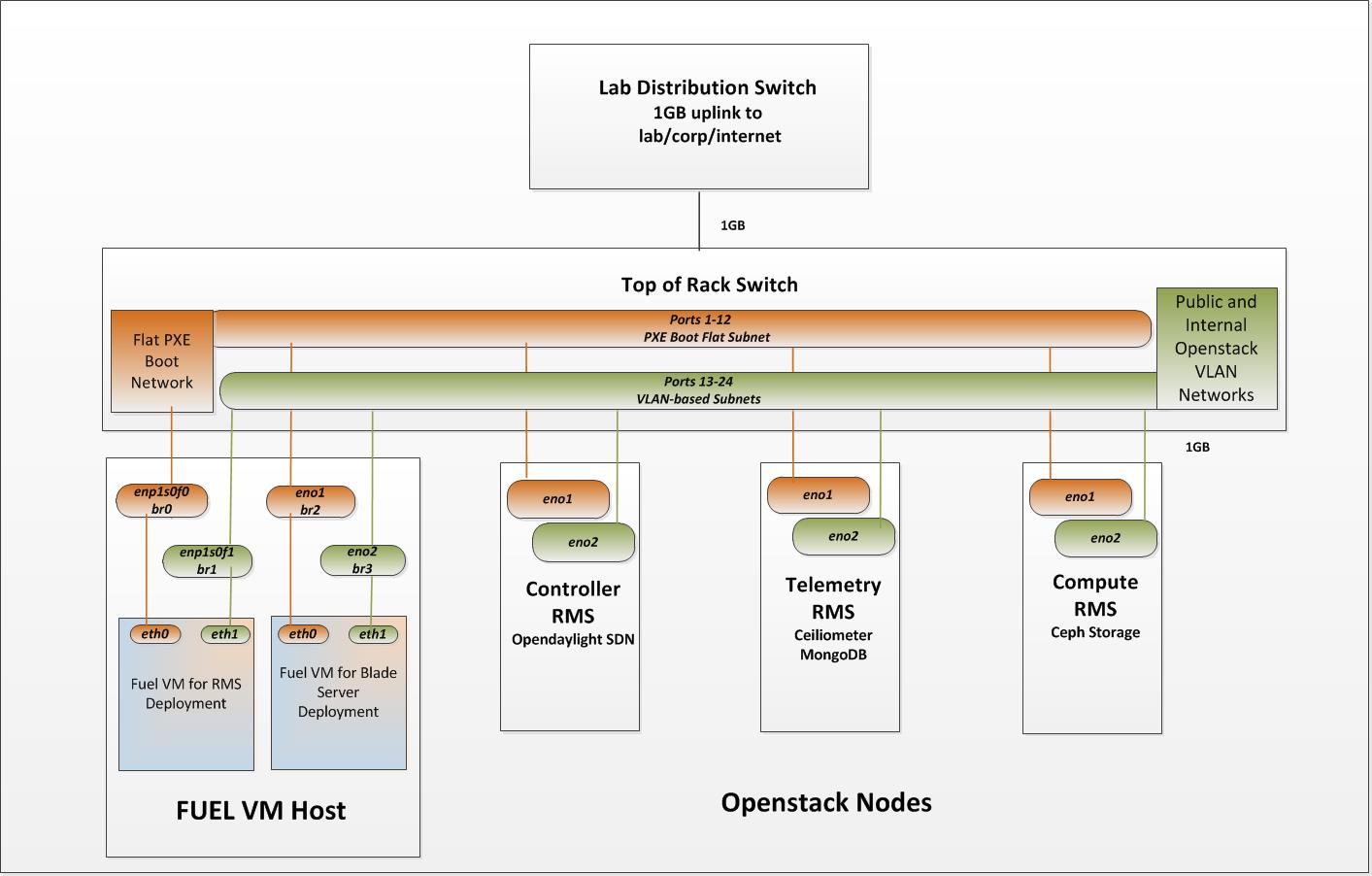 Here are some important points:

If you are not huddled next to your stack of systems, you will likely wish you had viable remote consoles. Unless remote management capabilities are built into the server, this would be through an Ethernet-enabled KVM switch.  You will probably need to change BIOS settings, check the progress of PXE boots and get to the systems when networked ssh is not functioning for reasons unknown.

Let’s move on to the Fuel setup. As a quick refresher, Fuel is an installer for your OpenStack/OPNFV environment that provides a GUI to lead you through the OpenStack configuration (If you need a refresher, here’s the link to an earlier blog). As I have mentioned, the OPNFV Fuel Installation Guide is quite comprehensive, laid out in cookbook fashion so that it can be followed from start to finish. So, nothing will be gained by rehashing it. What I will do is point out some “gotchas” that got me in the hope that they won’t get you. 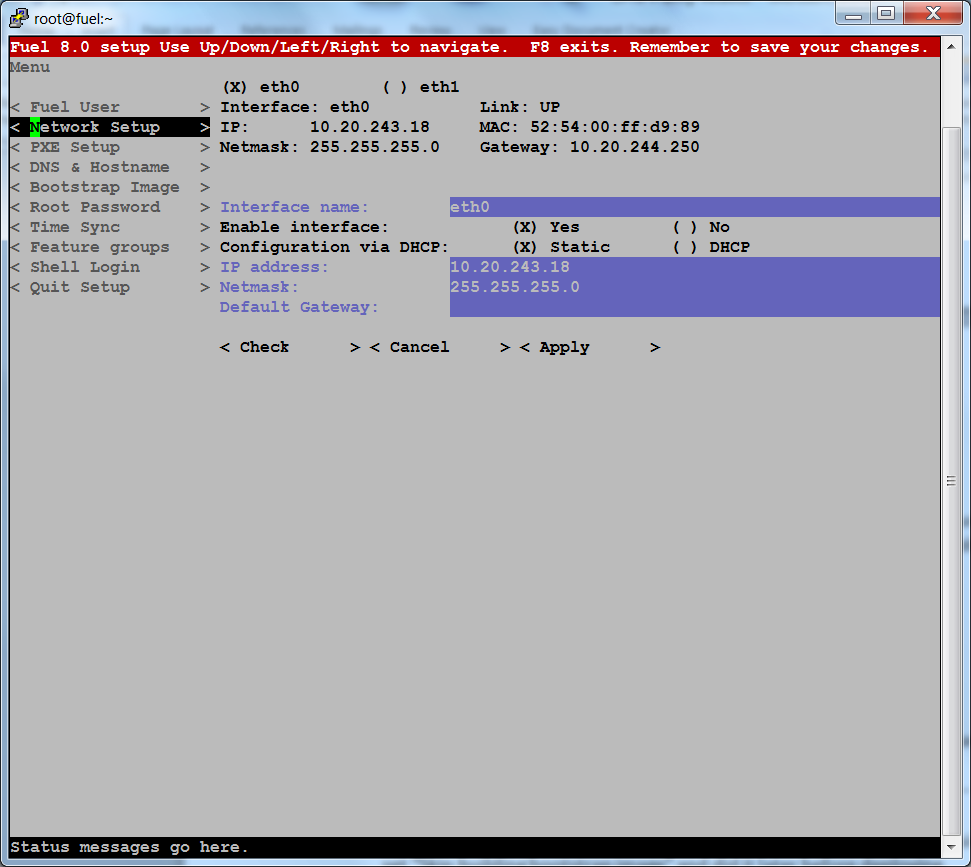 As with the Fuel installation, the OPNFV Fuel Installation Guide  does a good job of laying out the steps of setting up for and doing the OpenStack deployment using the Fuel GUI. However, there are some traps you can possibly fall into along the way. My next blog entry on my OPNFV journey continues with exposing some of those traps as well as highlighting some additional points to think about in deploying your OPNFV platform.