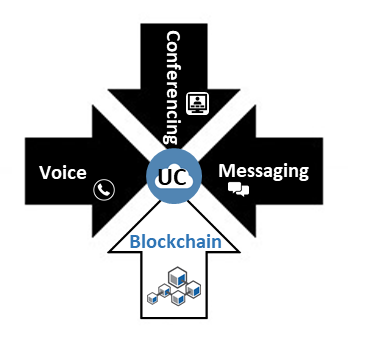 Does blockchain have real value in Unified Communications or is it like trying to fit a square peg in a round hole? Blockchain technology is disruptive in its ability to provide the creation of a distributed ledger eliminating the need for a centralized or third-party participant acting as a middle man to broker transactions.

Bitcoin is an example of a digital currency application that uses blockchain technology, however, it is only just that: an application. Sally Davies, writer for Financial Times provides us with a good analogy of the relationship of Bitcoin and Blockchain as “[Blockchain] is to Bitcoin, what the internet is to email.”

Why is using blockchain for facilitating transactions between multiple parties better than the way things are handled now? In current transactional models, especially in the realm of finance, a central third party, like a bank keeps the “golden” ledger on behalf of the multiple participants that are involved in a transaction. Each participant keeps their own ledger as well, but must convince the centralized third-party that their version of the ledger is accurate.

Blockchain eliminates the need for a centralized clearing house by linking together the blocks or records that make up ledger and validating them using cryptography. In this way, old transactions are preserved forever and new entries are added in a permanent and unalterable manner. A good explanation can be found on Blockgeeks. Applications that build on top of blockchain platforms are referred to as Decentralized Applications or Dapps.

So, in theory any service that is centralized or requires the need for trusted, transparent transactions between multiple parties can be fair game for blockchain technology. Self executing “contracts” or smart contracts can be established that are autonomous and facilitate the exchange of any items, components or things of value. Ethereum is a blockchain platform that supports the creation and application of such smart contracts.

Using platforms like Ethereum, Dapps can be developed that apply to all sorts of industry verticals. I posed the question to some of my coworkers as to what applications in communications they think could be transformed using blockchain technology. Diederik Husslage (@husslage) noted that blockchain touchpoints include authorization, trust and data integrity at potentially low cost, so he suggested looking to unified and real-time communications applications that involve these activities like:

Another interesting communications-related project backed by Mark Cuban of Shark Tank fame is the Mercury Protocol which is built on the Ethereum blockchain. The Mercury Protocol is an open source project geared towards messaging platforms that want to take advantage of blockchain technology. It addresses issues such as security, user privacy and content silos. The Mercury Protocol integrates a new blockchain token called the Global Messaging Token. People can earn tokens by performing incentivized tasks such as reading a specified number of posts a day or within a certain amount of time, and then use any tokens earned for premium services. This particular token approach differentiates itself from applications like Bitcoin in that its value wouldn’t fluctuate independent of the application but rather would be more directly tied to the Mercury Protocol related app that it’s built into.  Also, the protocol will enable platform independent, decentralized communications making it possible to send messages between any Mercury Protocol integrated platforms.

Amid all the excitement about the possibilities associated with blockchain technology, it currently is facing some considerable barriers when it comes to scaling. Herman Schoenfeld, founder of Sphere 10 Software, gave a very good presentation at the recent TechXLR8 in Singapore where he talked about scaling blockchain for global adoption. In the presentation he pointed out that Bitcoin currently handles about 3 transactions per second. Compare that to Visa which processes 2,000 transactions per second and can scale up to 50,000 at peak usage, or PayPal which does 100 transactions per second. He points out that Ethereum can only currently handle 15 transactions per second which would not be enough for applications with large amounts of transactions (Uber for example). And with Bitcoin, new transactions are being added constantly making that blockchain grow by about 2GB/day since every transaction needs to be recorded permanently. One solution, PascalCoin, claims infinite scaling without increasing storage size, regardless, blockchain technology will have to scale up significantly to handle the anticipated load. And the various platforms are exploring different methods to address this issue that involves addressing block size.

It's clear that blockchain is starting to make its way into real-time communications and the Internet of Things; where do you think it will start making inroads? Please share your thoughts on applications where it could impact and disrupt the way we look at communications. Tweet us at @Dialogic or email me at [email protected].