Can Chatbots be more Human than Humans? - Jacada - ContactCenterWorld.com Blog

Can Chatbots be more Human than Humans? 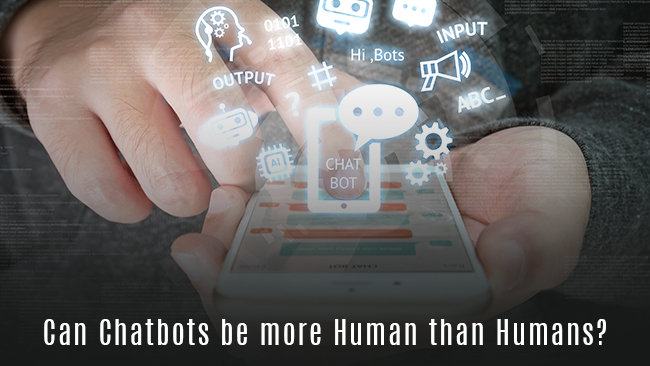 Chatbots have come a long way in a short space of time, and it looks like it’s only a matter of time before they are more human than human beings themselves.

Nearly 70 years ago, the so-called ‘father of the computer’, scientist and mathematician Alan Turing, developed the Turing test, which tests a machine's ability to exhibit intelligent behavior that is indistinguishable from that of a human. Ever since then, people have been trying to build a machine that can flawlessly mimic a human conversation.

The chatbots of today can trace their lineage directly back to the early attempts by people to create machines like this, and as technology continues to advance, it will only become more and more difficult to identify whether we are talking to a human being, or some form of artificial intelligence.

With this in mind, it is no wonder that an increasing number of businesses want to use chatbots to deliver personalized customer experiences. Naturally, such an approach can only be effective if the chatbot is able to converse with consumers in a meaningful way. What we mean by this is that it must be able to talk in a manner that is natural and contextual, and also be able to demonstrate problem-solving capabilities.

So modern chatbots need to be designed from the outset to deliver a convincing level of ‘human-ness’, as customers feel much more comfortable speaking to a machine that is able to communicate like a human would, rather than one that’s responses are obviously robotic.

From a semantics point of view, the machine must be capable of comprehending meaning, so that when a customer talks to it as people normally do, it can appreciate the specific meaning they are trying to convey. Finally, pragmatics is all about the influence of context and shared knowledge in meaning.

Without this third aspect, a machine will only be able to understand the literal meaning of what is said to it. So if a client contacts a customer service bot because they say they ‘need a hand’, the likelihood is that it will take that sentence to mean they need a replacement for an important part of their anatomy!

Ultimately, a good chatbot within a contact center should have a handle on all three of the above language issues, since if you are going to utilize a machine to take the place of the agent, you want it to be at least as good – and preferably better – than a human being at the specific task that has been designated to it.

The good news is that there are chatbots available that can do all of the above, and moreover, these machines are able to offer you many benefits that simply cannot be obtained with a human.

For one thing, chatbots have the ability to trawl through thousands of knowledgebase entries, documents, webpages and any other source of information you link them up to, exponentially faster than the best human could.

Another key issue is that oftentimes, people will be more likely to open up to a chatbot than they would to a person. In particular, customers that have had a bad experience may be more open to discussing it in detail with a machine, which they know will not sit in judgment on them.

In addition, by virtue of being machines, these ‘virtual agents’ never get tired, so they never require breaks (and they aren’t the type of ‘employee’ to sneak off for a quick cigarette either). They are capable of simultaneously holding conversations with thousands of people, which – you will agree – is far more cost effective than having individual agents processing such discussions.

Furthermore, this capability means that consumers will experience reduced hold times, which we all know is a source of endless frustration for those communicating with a contact center. And of course, they are willing to work 24-hours a day, seven days a week, all year round (even on Christmas and Thanksgiving) without complaint.

A chatbot will never call in sick at the last minute, leaving you short of agents, and they never have bad days, so there is no chance of them getting angry with a caller. Machines don’t have emotions, so these won’t boil over at any point; your chatbot is never going to attack the customer verbally, or swear at them in frustration.

In fact, they are the perfect ‘point man’ for the customer service department, as they can easily handle repetitive tasks that might irritate human agents. They free up said agents to handle the more complex tasks that have a major bearing on customer satisfaction, and they can access far greater amounts of pertinent data in a relative blink of an eye and parse this information for the necessary details, so that customers never have to repeat their information multiple times. And of course, they are always polite and friendly, which is exactly the response you want from what will often be the first point of contact for a consumer with your customer service center.

Finally, the right bot – something like Jacada’s Intelligent Assistant – can be used for proactive customer service too. In other words, it is a machine that automatically contacts the customer to conduct a follow up. This could be as a result of a previous complaint, or even a recent product purchase. It can even wish well wishes to individual clients on their birthday, which is something that would likely require multiple calendar reminders in a human agent’s diary!

Chatbots may not have reached the point where they are more human than a person (yet!) but they are already capable of understanding the intent of a customer’s question, determining the best way to resolve this problem and returning a relevant and personalized response that feels friendly and conversational.

The machines like chatbots and virtual agents are clearly here to stay, but never fear, it will be in a manner that is beneficial to humankind and is the complete antithesis of how popular science-fiction portrays the robot revolution!