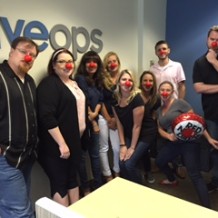 The night of May 21 was filled with humor, awareness-raising, celebrities and, most of all, red noses! The inaugural Red Nose Day telethon in the U.S. raised more than $21 million to support children and young people living in poverty. It was an outstanding event with great results.

LiveOps was proud to be a part of this telethon and entertainment event. More than 2,000 of our home-based, independent agents volunteered to participate, taking calls and processing donations. LiveOps agents handled more than 38,000 calls and processed nearly $1.7 million during the three-hour telethon. That’s pretty amazing!

Our agents are a fantastic group of people who support multiple fundraising events every year. LiveOps agents have taken calls during the MDA Telethon for the past three years, as well as Stand Up to Cancer and the Concert for Hurricane Sandy Relief. They truly enjoy helping people and I think our agent Rebecca summed up Red Nose Day best: “Great charity. I enjoyed taking a part in this one. No child should be going hungry ever!!! The response was terrific.”

The Red Nose Day telethon was a three-hour special, hosted by Seth Meyers, David Duchovny and Jane Krakowski, that included live musical performances, comedy sketches and pre-taped videos. Celebrities including Julia Roberts, Justin Timberlake, One Direction, Chris Martin, Elizabeth Banks, Anna Kendrick, Jack Black, Bill Gates and Kermit the Frog appeared. Some performed, some spoofed and some took us to places to show what children living in poverty experience. It was truly an awareness-raising, star-studded evening and Americans rallied to support this worthy cause.

A big thank you to all of the LiveOps agents who supported Red Nose Day—you guys are fantastic and we are happy to work with you!