A recent Finnish university study on voice biometrics has been making headlines – and most of those news stories have been inaccurately summarizing the results with concerns as in our title above, leading many to believe that cyber crooks can compromise even the best speech recognition systems.

So why are the news stories missing the mark? The real story? Let’s start with the conclusion.

“The results indicate a slight increase in the equal error rate (EER). Speaker-by-speaker analysis suggests that the impersonations scores increase towards some of the target speakers, but that effect is not consistent.”

So how could the researchers write that “Voice impersonators can fool speaker recognition systems”? To understand that, you need to dig deeper into the study. Here are the actual data points:

So what does this data mean? Let’s start with some definitions.

Same Text- This is active voice biometrics where the user is given a specific phrase to repeat. (Often it is “My voice is my password”.) Once enrolled the user is asked to speak the phrase and then this new voiceprint is compared to the voiceprint on file. 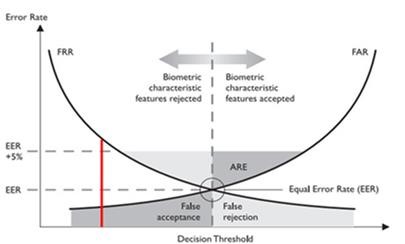 False Accept Rate- This is the percentage of times a system incorrectly matches to another individual’s existing biometric. Example: fraudster calls claiming to be a customer and is authenticated.

False Reject Rate- This is the percentage of times the system does not match the individual to his/her own existing biometric template. Example: customer claiming to be themselves is rejected.

Equal Error Rate or EER- The EER is the location on the graph curve where the false accept rate and false reject rate are equal. In general, the lower the equal error rate value, the higher the accuracy of the biometric system. Note, however, that most operational systems are not set to operate at the “equal error rate”, so the measure’s true usefulness is limited to comparing biometric system performance.

Now that we have that, the data showcases the following:

Finally, and maybe most importantly, the researchers did not perform the tests with Nuance voice biometric technology. This is evident by the very high EER rates reported by the study as a “baseline” result, ranging from 4.26% EER to 10.83% EER. No tests were conducted on deep-neural-network based voice biometric algorithms, the technology used by Nuance and deployed through scores of enterprises worldwide.

In conclusion, although this topic does merit additional research, Nuance will continue its focus on improving our ability to address actual fraud attack vectors, including brute force attacks, voice imposters, and recording attacks while continuously improving the voiceprint and also improving mitigating strategies for future attack vectors that we believe will eventually be used by fraudsters such as synthetic speech attacks.

Contact us if you would like to learn more about the great strides Nuance has made in Voice Biometrics.