OrecX call recording software can easily record VoIP traffic once it's seen on the server interface. Small office users (under 100 seats) can use Port Mirroring Switch (SPAN, port spanning or port monitoring) to get the right traffic to the OrecX server simply and easily. This is best used in distributed office environments with many locations using port mirroring (and leveraging OrkUI) to manage and administrate from a single location.

Port Mirroring, also known as SPAN (Switched Port Analyzer), is a method of monitoring network traffic. With port mirroring enabled, the switch sends a copy of all network packets seen on one port (or an entire VLAN) to another port, where the packet can be analyzed.

Port Mirroring, which is supported in nearly all enterprise class switches (managed switches), allows other computers to see network traffic, which is not visible to them in general cases. Managed switches have a configuration interface (web-based or command-line console), which administrators may use to specify the source port(s) to be mirrored and the destination port, where a copy of all packets will be forwarded.

The pictures below illustrate how a port mirroring switch configuration works.

Four computers (A, B, C and D) are shown in Figure 1. They are connected to a general switch without port mirroring support. In Figure 2, they are connected to a managed switch with port mirroring support, while network traffic is sent between computers A and B (one portion of data is sent from A to B and another portion is sent in the reverse direction from B to A).

In Figure 1, you will see how a general unmanaged switch works. It forwards packets directly between ports, where computers A and B are connected. Other computers (C and D) do not see these packets.

In Figure 2, you see the same scenario but on the switch with port mirroring functionality. The network traffic is sent again between computers A and B. However, there is a computer D, which is listening (monitoring) to that traffic. Every packet, which is sent or received by computer A is duplicated (mirrored) to computer D port.

How Port Mirroring function can be used for recording VoIP calls
OrecX leverages the port mirroring capability of a network switch to accomplish "unobtrusive" recording of VoIP calls. The switch forwards a copy of every network packet sent or received by IP phones to the OrecX server. The picture below illustrates how the network should be configured to allow for the recording of calls. 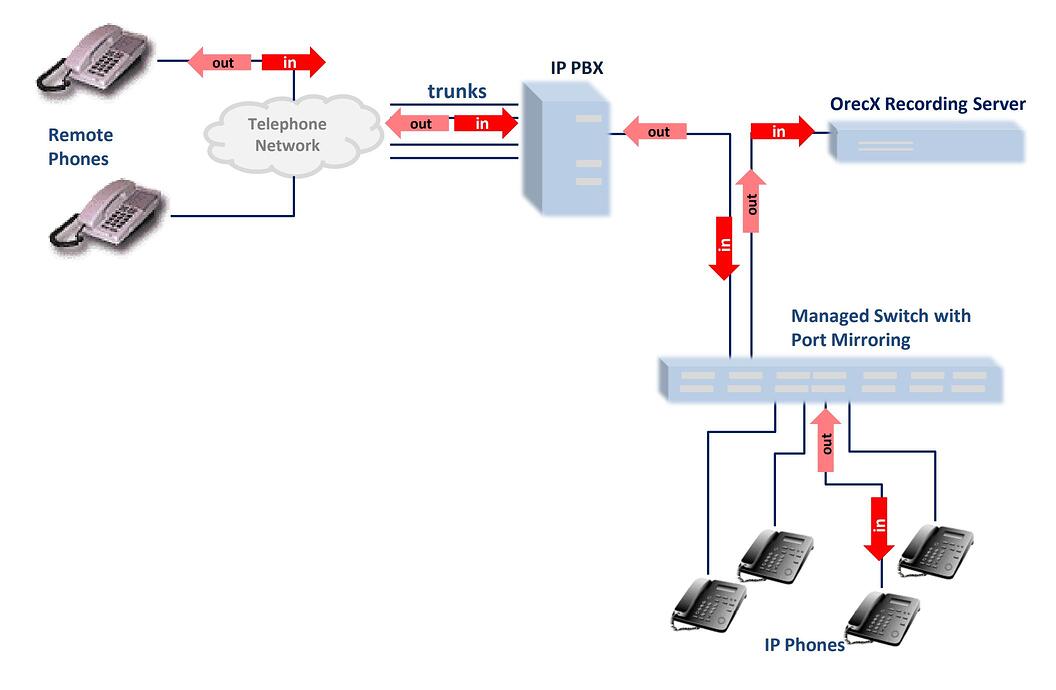