ConnectCentral 2017 Ends with Focus on Innovation

The third and final day of RingCentral’s ConnectCentral user conference focused on innovation achieved, under way, and yet to come.

In addition to “sharing a vision and a strategy for collaborative communications, we want to show you how we’re bringing it all to life with a relentless focus on innovation,” Kira Makagon, EVP of Innovation at RingCentral, said in the day’s opening keynote. She also encouraged audience members to think of themselves as also “part of my team,” since customer demand determines what innovations are truly useful.

In addition to showcasing RingCentral’s latest cloud software, this was a day for showing off integrations like the latest RingCentral widget for dialing or texting from within Gmail and the potential of APIs such as the chatbot interface to RingCentral Glip.

One of the most important ways RingCentral has been innovating is by rethinking the connection between communications and collaboration and providing new ways for workers to navigate smoothly between different modes of interaction.

To dramatize how that can make a difference for a business, VP of Product Management Jose Pastor led a demo built around a fictitious retailer in the process of opening a new store in Boston. Here is the scenario:

“The goal here is empowering teams to get to the bottom of things quickly, with seamless integration,” Pastor explained. The store manager, who is rarely at his desk, was able to participate in all these interactions through his phone while others were on their computers.

Ultimately, the point is to speed resolution of business issues, such as solving problems at a critical time for a store opening, with smooth handoffs between RingCentral, Google, and Salesforce. “Ultimately, the goal is making you more successful,” Pastor said.

In a panel discussion, representatives from RingCentral integration partners Google, Salesforce, and Okta said they shared the goal of allowing multiple cloud applications to combine to serve their joint customers better. 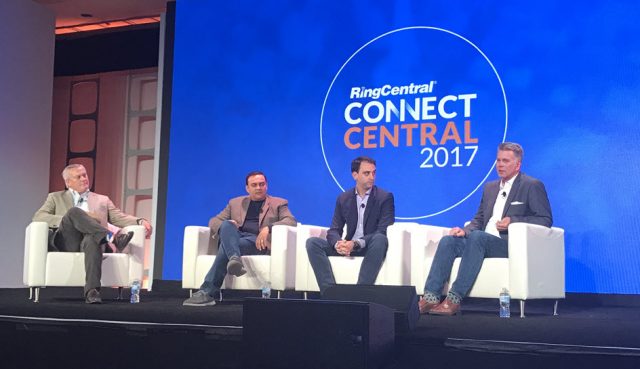 “Best of breed is king in the cloud,” said Alex Salazar, VP of Product, Integration and Partner Ecosystem at Okta. His firm gets its insight into the trends from its role as an authentication service that allows people to sign into multiple cloud applications more easily. Almost every category of application is led by a different vendor, he said. “There is no one vendor that is really dominant in multiple categories.”

Doug Chaney, VP Business Development for the ISV Partners program at Salesforce, said the ecosystem of cloud partners expanding rapidly and artificial intelligence is starting to play a bigger role in making them all work together.

Pankaj Dugar, who leads the Alliance Tech Partners program at Google, agreed, although he said customers are tiring of the hype around API and looking for practical results. “If you talk to them about machine learning and productivity, what they want are really simplistic scenarios that they can go ahead and implement,” he said.

One partner showcasing its AI capabilities at ConnectCentral was Cloze with its smart chatbot integration with Glip and the RingCentral platform. Cloze CEO Dan Foody described his software as “somewhere between a CRM and a personal assistant,” a product designed to keep track of all your interactions with customers and potential customers across channels including email, phone calls, and social media. When the Cloze chatbot is connected to Glip, team members can ask questions like, “Who is the last person who talked to David Carr?” and get back a listing of the most recent email contacts as well as records from the RingCentral call log. Messages phrased as commands, like “Remind me to call David Carr tomorrow” can also be executed on the user’s behalf.

In a tutorial on how to build a chatbot, Foody explained that it is less challenging than you might think thanks to the advent of cloud services for natural language processing, a type of AI. “A lot of the heavy lifting in this can be done for you,” he said. “You can take advantage of the work done by the bot adapters, by RingCentral, and by AI services.”

RingCentral provides adapters for several popular bot software developer kits, including BotKit, the one Cloze originally started with. Foody said his developers have since factored out BotKit and connected directly to the RingCentral APIs, but he does recommend using a bot SDK to get started.

Those resources give you a head start, but you will have to think through the many different ways someone might phrase a question and the follow up questions the bot might have to ask to clarify the request, Foody said. For example, “Remind me to call Dave” might elicit clarifying questions. For example: which Dave in your contact list are you referring to? And when do you want to be reminded?

AI software can be trained to recognize a variety of forms in which a question can be phrased, but the software developer still has to take responsibility for training it properly. To respond properly, your software will need to be smart enough to identify entities such as personal names. That can be tricky, since the software may be good at recognizing common English names but not tricky Indian ones. Another example is you want your software to recognize the significance of dates, but it might be confused about whether “April Carter” refers to a person or a date.

“You’re not going to get this right the first time,” Foody said. “Building bots is an iterative process.”

That is how innovation moves forward.