The software which performs repetitive, automated and predefined tasks is named as “bot”. When we hear the word “bot”, it is highly likely that most of us first think of chatbots. Probably the first thing that comes to mind when we say ‘chat’ is the correspondence through internet applications. However, we all know that every healthy individual belonging to the human family can be an actor of chat action by signing or speaking and later, on writing.

Yes, we, as a member of the human family, have been doing this for so long that we can say chat is one of our unique and natural features. As it is one of the common features of the entire human family, we don’t need something like “chatman” to name any group in this family. Undoubtedly, in more and more situations in our daily life, we come across conversational algorithms or chatbots more often; for example, when buying plane tickets or clothes from an online store. Although chatbots are now appearing in almost every aspect of our daily lives, the history of bots in this field is not very long. It was generally implemented with the aim of making users feel that they are chatting with a real person; a computer, program, algorithm or artificial intelligence that enters into a dialogue with a person is called a chatbot. The surge in the use of chatbots, whether simple or more advanced artificial intelligence applied, has been driven by the enormous expansion of the Internet and especially social networking sites.

One of the oldest and best-known chatbots is a program called Eliza created by the Artificial Intelligence Lab at MIT between 1964-1966. After that date, we see many chatbot projects implemented as a result of research and development studies. However, they can be used publicly and globally in the 2000s with the widespread use of the Internet. Today, a significant part of customer service is carried out through chatbots. Business Insider estimates that the global chatbot market, with a volume of $2.6 billion in 2019, is expected to reach $9.4 billion in 2024, with a compound annual growth rate of 29.7%. The report also suggests that the highest growth in the chatbot implementation will be in the retail and e-commerce sectors, driven by the increasing demand for seamless omnichannel experiences.

Today, simple chatbots, whose capabilities are limited to answering FAQs in a certain field, are being replaced by chatbots powered by artificial intelligence, machine learning, natural language processing, speech recognition and analysis, speech synthesis and voice biometrics technologies. In this way, multifunctional/capable chatbots can be developed that can express themselves more humanely, understand various expressions implied by different styles and terms, and adapt the language they use to the style of the people they are communicating with.

We are now in a world where chatbots are the main actors in the field of corporate communication. Their use not only helps organizations improve their own potential, but also means a more enhanced user experience. With bots powered by technologies such as Speech Recognition, Speech Synthesis, Voice Biometrics, Natural Language Processing, Artificial Intelligence, voice and text analysis, Sestek, where I used to work on different projects for many years, can easily design customizable chatbots for the needs of organizations. Based on Sestek’s 21 years of conversational technologies development experience; with the solutions currently being used by 275 institutions in 20 countries; self-service rates are increasing significantly and the workload and stress on the agents are relieved. For example, according to September 2021 data, 250,000 customer interactions have been carried out via the Whatsapp bot utilized by Hepsiburada, Turkey’s leading e-commerce platform. With this application, 14% increase in self-service rates and 10% reduction in contact time with live representatives can be achieved. You can watch TR AI Week session titled “The Magnificent Duo: Artificial Intelligence and Self Service” by Taner Timirci (Hepsiburada, Chief Operations Officer) and Selin Özbalmumcu (Sestek, Sales Manager for Turkey) for details.

Another milestone project is the virtual assistant named Selim, which developed by Sestek for KUVEYT TURK and used by their 2.4 million customers in 12 months, has reached a success worth mentioning in recognizing what is said (intent recognition rate) with an accuracy rate of 97%. Selim was able to answer 6.2 million questions from 2.4 million users in 12 months, and the rate of connecting KUVEYT TURK customers to live representatives decreases by 29%. For details, you can review the case study titled (ACCELERATING DIGITAL TRANSFORMATION WITH VIRTUAL ASSISTANTS).

At the end of the day, the digital world continues to flourish, with the growing data flow rates and the increasing amount of data we collect in the digital network. With the advancement in artificial intelligence and machine learning, bots are perfecting their ability to process the data in question. Considering that bot assistants can make a reservation for a hairdresser or in a restaurant without making the person they are talking feel they are communicating with a bot, (Google Assistant calling a restaurant for reservation), we can say that we are confidently moving towards a future where a bot, which is initially intended to be used in a certain area, can be easily adapted to work in different areas as its processing power, knowledge and capabilities improve. In a nutshell, bots are expanding the boundaries we set for them day by day. One can surmise that in near future we will be able to define a bot as “a tool that is able to chat as one of its unique and natural features”, and there will no longer be a need for a special name like “chatbot”. Moreover, in the not-too-distant future, thanks to the “unsupervised learning” capability, which we have already started talking about a lot, for example, a bot initially programmed for customer relations will be able to train itself with the knowledge it receives in that field and can serve beyond its original purpose such as a sales assistant bot or HR bot when needed. 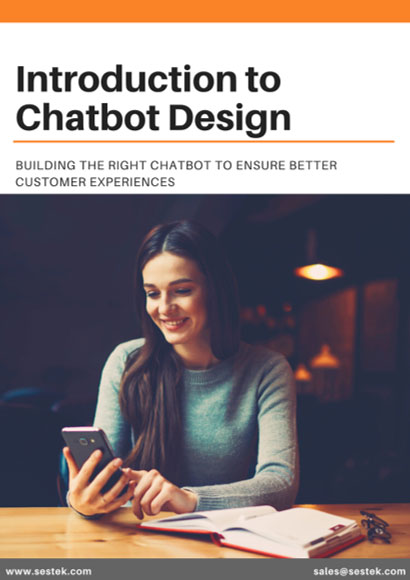 Building The Right Chatbot To Ensure Better Customer Experiences.
Today, chatbots are a significant part of customer services. From reserving a ticket to completing a banking transaction, they can offer any service that a live agent can. But being able to do these tasks might not be enough for enhanced customer service. Because customers not only expect high-quality services but also personalized experiences. According to recent research, more than 63% of customers expect personalization as a standard of service. So, chatbots need to answer this need to ensure an enhanced customer experience. Why do chatbots need personalization? Today’s customers seek more than functionality. They expect authentic connections with businesses. And the only way to build a strong and emotional bond between customers and chatbots is personalization.