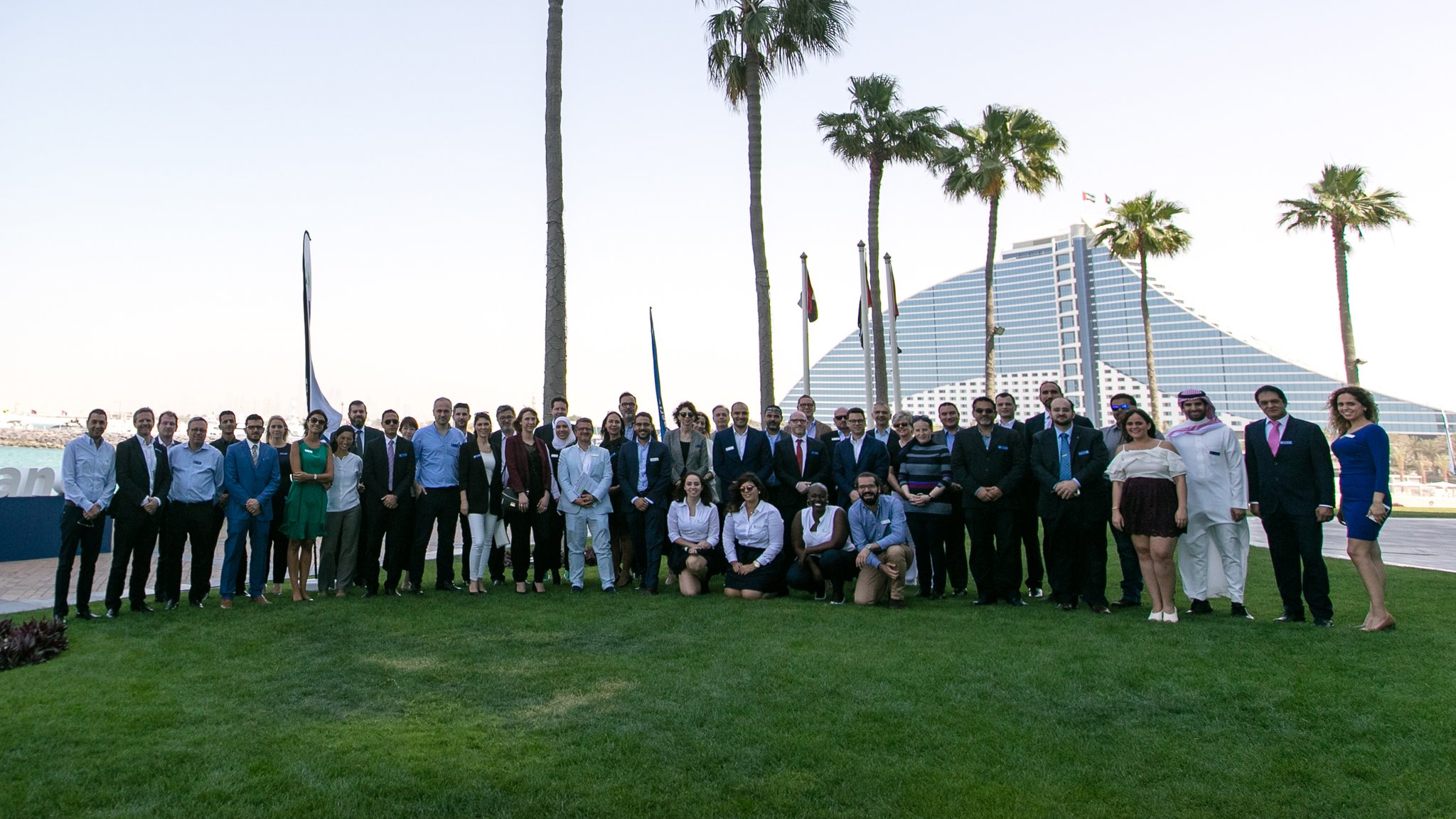 That’s a wrap! Both the Amsterdam and Dubai legs of the 2018 Leader Insights Forum are now complete. As you can see from the summary of day one in Dubai, the debate was excellent and there were many great insights into the future of Customer Experience (CX).

Guests will remember the Dubai Forum as the only outdoor event that had problems because the weather was too nice! As we opened the event the technical team were trying to cool the computer equipment – one important PC stopped working just before the first speaker walked out on stage!

Fortunately, the shade eventually came and the initial headaches were forgotten. By the end of day two most of the delegates were saying that the risk of holding a forum in an outdoor venue had been worth it in the end. So many corporate events are held inside hotel meeting rooms, but this event really stood out because of the innovative venue.

Day two featured two sessions, Raúl Grijalba on the future of work and skills and Myriam Gufflet on GDPR and data privacy. Raúl Grijalba joined ManpowerGroup Spain in 1997 and, in 2012, became Spain Executive President. Since then, he successfully led the transformation of the company in Spain until becoming number one in talent solutions. His profile of working in Human Resources strategy and leadership was ideal for this topic.

Raúl started by framing the historical context of the debate around skills in the twenty-first century. He outlined the importance of the changes we are seeing at present as revolutionary – in fact he called it the Fourth Industrial Revolution.

Raúl argued that Customer Experience (CX) could in fact be included in this list of changing technologies as we are seeing a complete redefinition of how companies and customers interact with each other. He did have some positive news though. When his company ran a survey that involved over 40,000 executives they found that 86% believed that the near future would see either stable headcount at their business or an increase.

Raúl also described how customer-facing jobs were about to see a boom of at least 6% in the next two years. Communication skills are becoming particularly valued in this environment – in fact for customer-facing professionals the ability to communicate well is the most important skill in the near future in addition to lifelong learning. Raúl coined a phrase – learnability – that describes how the ability to keep learning and absorbing new information will be essential for future workers.

Raúl’s talk was particularly interesting because he went beyond the usual description of skills and gave some interesting views on macro-economic trends and how these bigger changes can be mapped back to the contact center. He summarized the new reality by saying: “What got you here, won’t get you there.”

Myriam opened with a brief summary of GDPR and then quoted a famous person: “with great power comes responsibility.” Before any of the audience could guess, she revealed that it was Spiderman, but the words are certainly appropriate for GDPR!

Myriam emphasized that GDPR is not a silver bullet: “It took several years to draft this new regulation and it is really just a snapshot in time. It’s right for 2016 and it was amended over 4,000 times when it was in draft form. It was probably the most lobbied EU regulation ever.”

Myriam’s focus was very much on how to use GDPR as an opportunity, rather than being a problem. She emphasized during her talk, and the Q&A session, that companies should be using this as a way to prove to customers that they are being careful with their data.

This flies in the face of many commentators who only see regulation as a problem. Myriam said that people want more transparency today, from their leaders, companies, and each other. People endlessly share their life on Instagram and GDPR is one part of this change in the how we define privacy.

Any company that proactively demonstrates that it is looking after customer data and following regulations can expect to improve the customer experience and boost customer trust. Trust has always been important, but in this Big Data environment it is more important than ever. Myriam made it really clear that she thinks most people should reverse their thinking on GDPR and embrace the opportunities.

As we closed the forum, Yannis Tourcomanis, the Teleperformance CEMEA CEO put some statements on the screen as a recap of what the earlier speakers had said:

Anders Sorman-Nilsson: “Who can remember when the cloud was just what blocked the sun and Amazon was a rainforest?”

Mike Havard: “Gamers don’t exit a game to make a call to customer service! They expect service right there inside the game!”

Paolo Righetti: “You cannot hide your telephone number because it costs a lot to answer calls. You may be damaging customer loyalty much more than you think by hiding behind a wall of Artificial Intelligence.”

Raúl Grijalba: “In the future, 86% of senior leaders believe that the number of jobs will stay the same or actually increase.”

Thank you to all the delegates, speakers, and the Teleperformance team who worked tirelessly to make the Leader Insight Forums in both Amsterdam and Dubai such a great success. The team is now on their way home!

You can catch up all the blogs from the event by checking our “Global Blog” company page. Our regular comments on Twitter will continue so please feel free to follow and comment there.