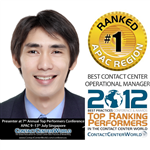 Entering the 7th Asia Pacific Top Ranking Performers Conference and Awards (2012) with great expectations and high hopes, we as a company aspired to put the Philippine archipelago in the map of ContactCenterWorld, with a significant industry award that would recognise the Philippines as the new capital of contact centres:

"India, where offshore call centers first took off in a big way, fields as many as 350,000 call center agents, according to some industry estimates. The Philippines (with about 400,000 call center agents), which has a population one-tenth as big as India’s, overtook India this year, according to Jojo Uligan, executive director of the Contact Center Association of the Philippines." – Source: The New York Times, Article by Vikas Bajaj (correspondent for The New York Times), Published on November 25, 2011. 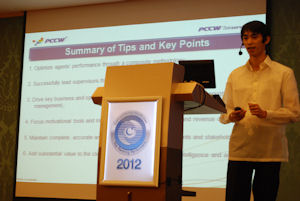 We understand that the Annual Top Ranking Performers Conference and Awards is considered the Olympics of contact centres and contact centre professionals. As such, we felt this is one great opportunity to for us to honour the country where we operate in. Our company highly values corporate citizenship and social responsibility. Thus, this is our primary motivation in participating and competing internationally at the 7th Asia Pacific Top Ranking Performers Conference and Awards (2012).

Furthermore, we fully believe that participating and winning in this prestigious event will not only lead to greater local and international marketability and enhanced client relationships, but this outstanding experience of sharing best-in-class contact centre ideas and practices will also further enhance our operational outlook.

With more than 1,500 entrants from around the world this year, a per region short listing was made by over 50 judges who run contact centres across EMEA, the Americas and Asia Pacific. The official shortlist was announced on February 24, 2012 and further ahead as the conference agenda took form, the finalists who were deemed the best in the region were selected and announced to present and compete at the Asia Pacific Top Ranking Performers Conference and Awards in Singapore. These chosen delegates came from Japan, China, Australia, New Zealand, Thailand, Hong Kong, Malaysia, Indonesia, Fiji, Singapore and the Philippines. Not only eight out of our ten entries made it as finalists; we were also the only selected entrants and recognised finalists from the Philippines. We then received the awe-inspiring result and acknowledged the challenge of competing internationally at this momentous event.

Preparing for the event itself, we dedicated a substantial amount of time and effort in planning, scheduling and executing the activities associated with this significant endeavour. We drafted our individual presentation and collaborated on its contents and value one at a time, whilst we carefully reviewed and applied the guidelines set by ContactCenterWorld. Aligned by a well-structured and objective brief document provided by ContactCenterWorld themselves, we had ensured strict compliance with the presentation guidelines.

For two months, we scheduled and attended a 3 to 4-hour presentation workshop that is weekly recurring. At the workshop, we tackled up event updates on a regular basis to ensure everybody in the team is on the same page; we individually presented in front of an internal corporate audience week after week after week, and sought constructive feedback/criticism after each presentation. Those months of preparation had been a rollercoaster ride for us, as we encountered dozens of obstacles and challenges along the way.

To name a few:

With hard work, concentration and despite of the challenges we had, we remained dedicated to the preparation activities whilst we also balanced our individual duties and responsibilities at work. Each of us did a lot of practice presentation at home and during our free time. We did our last presentation workshop on the first week of July, 2012. As we took pride and honour in being the only selected entrants and recognised finalists from the Philippines, we had decided to present wearing the traditional Filipino formal wear, the Barong Tagalog. We felt that wearing the Barong Tagalog in a foreign land as we represent the Philippines and our company in a global industry competition would be priceless indeed.

At the conference proper, we individually presented with passion, conviction and the thought of value that other delegates may take home our professional tips and key points, as we share our best contact centre ideas and practices on stage. The timer, Q&A session and the overall ambience were amazingly stimulating. We were also very pleased and excited about the event’s networking activities and breakout sessions. They were very engaging and productive.

We all came back home to Manila with renewed vigour, as we felt that our months of hard work and dedication had paid off. Our family, colleagues, friends and relatives were very glad and proud upon seeing us back in town. Overwhelming greetings and words of congratulations poured in from the people around us, and we just couldn’t stop telling them stories about the fantastic experience we had at the conference in Singapore. A press release article was written and published. An official announcement was made. Online topics, posts on social media channels, blogs and forums on the Asia Pacific Top Tanking Performers Conference and Awards 2012 were trending across the cyberspace.

For us, it was such a glorious victory for our nation and the company that we serve – a legacy that would truly inspire people to aim, work hard and drive business excellence that would further validate why the Philippines is cited as the new capital of contact centres.

PCCW Teleservices is a global contact center and business process outsourcing (BPO) provider skilled in all facets of voice and non-voice customer services, technical support, sales, retention, and other business processes. Our 24/7 operation, supported by technologies, management practices and operational processes, contacts customers in languages that make up over half the world’s population. Our flexible business model is designed to meet client requirements and maximize opportunities from every contact. Leading local and Fortune 500 companies have aligned with our network of multi-channel contact centers throughout Hong Kong, mainland China (Shanghai, Beijing, Guangzhou, Chongqing, Shenzhen), the Philippines, United States, Panama and UK to meet today’s challenges; bringing in benefits to improve service quality and customer satisfaction, increasing revenue generation and cost efficiencies and strengthening market competitiveness.