At the 2010 Best Practices Conference (Las Vegas 2-5th November) 'The Top Ranking Performers in the Contact Center World' – delegates heard from the top 3 in house contacts centers (mid size) in the world. Delegates heard from the award winning NTUC Income (Singapore), award winning Mass Mutual (USA) and award winning Volkswagen Group (South Africa). The presentations were exciting – lots of ideas and best practices were shared and the audience were asked to vote on who is the best in the world. 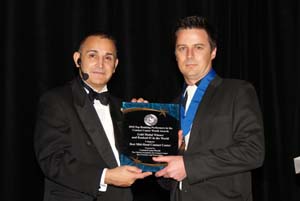 The Volkswagen CIC currently operates with 5 front line departments that are supported by a number of support functions such as Human Resources, Training and Development, Quality Assurance, Infrastructure Management, Workforce Management and Business Information.

Volkswagen Group of South Africa has adopted a strategy to become the number one manufacturer in customer service in the CCSI ratings (Competitive Customer Satisfaction Index) by 2010. The CCSI survey is conducted by an independent research company specialising in automotive industry surveys and determines overall sales and service satisfaction in the local motor manufacturing industry. The results of the survey are widely regarded as the key measure of customer satisfaction within the automotive industry.

Commenting on the win and being ranked #1 in the world, Marius Swanepoel, Call Centre Manager, Volkswagen South Africa told us "I am so pleased that the CIC has scooped the Gold award for Call Centre Best Practice (50-249 seats) at the Contact Center World Awards held in Las Vegas on 5 November. The awards are hosted by Contact Center World and are attended by the top performers from 30 countries globally. This in itself is such huge recognition. "

Swanepoel added "This is a fantastic accolade for the Volkswagen Group South Africa CIC and its people, without whom this award would not have been possible."

"To win this category on regional, national and international level (twice - first in the UK in the Europe, Middle East & Africa region) is an exceptional achievement in its own right. It also serves as recognition for the tremendous amount of hard work, innovation and progress in the CIC since the reengineering back in 2004. Thank you to everybody for the exceptional support and words of inspiration, it is much appreciated."

Raj Wadhwani, President of ContactCenterWorld added "All 3 presenters were amazing and shared so much. The Volkswagen Group are amazing and we are proud that they entered the awards, showcased their practices and won. I encourage anyone who believes they have great service or people in this industry to showcase their achievements and earn recognition as well as share best practices."

Top Ranking Performers in the Contact Center World Awards is an annual benchmarking and best practices awards program run by Contact Center World. More details of the 2011 awards which are open for entry until end of January 2011 at this link https://www.contactcenterworld.com/worldawards

The Top Ranking Performers Conference is a conference series that consists of 4 events around the world – 3 regional and 1 global best practices conference that is open for anyone to attend. More details of the 2011 conferences are at this link https://www.contactcenterworld.com/conferences