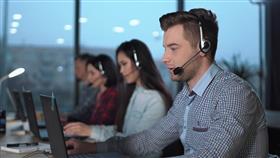 Sheffield, England, Jan 28, 2019 -- The boss of a utilities company said Sheffield staff were the "best employees you can get," as he launched an upgrade to its offices - and a search for 150 recruits.

XLN founder and chief executive Christian Nellemann said expanding into Sheffield from London was a "no brainer" due to the costs, and the commitment of staff who stayed an average of four years. It was vital when basic training alone lasted nine months.

He spoke at the official launch of XLN’s expansion and upgrade at One North Bank on the Wicker.

Sheffield Lord Mayor Magid Magid, wearing trademark baseball cap and chains of office, cut the ribbon after praising the firm’s investment in the city. The social media star also posed for photos with bosses and fans.

XLN sells bundles of utilities for the nation’s small businesses and "over-invests" in customer service to keep them happy. Most come to the firm after being let down by big suppliers, it is claimed.

Mr Nelleman said over the next five years Sheffield would grow to become "three-fifths of the firm", which is headquartered in London.

He added: "This is the place and the future for XLN. It’s a great base, these are the best employees you can get." XLN set up in Sheffield four years ago.

Mr Nelleman added: "We have all grown to love Sheffield over the years. Five years ago we wondered how to get to the next level.

"We were going to invest a lot of profit in customer service like no one else does. But delivering it is simply not possible in London. It’s very difficult unless you come north. We looked at Leeds and Northampton but Sheffield was a no brainer.

"We invested in grade ‘A’ open-plan office space and moving into One North Bank brought everyone together, changed the conversation, behaviour and productivity."

The length of tenure of employees in London was six to eight months, compared to three to four years in Sheffield, he added.

"It makes all the difference. It takes nine months to learn the job, it can’t be done in any other way."

XLN was helped twice by Sheffield City Council, in finding space and recruiting, and had been "outstanding," he added.

He finished: "We are incredibly grateful to set up here and make it a great success."

Brand director Julian Przygrodzki said: "We’re proud to say it’s not just a job, it’s a career, and we see our new expansion in Sheffield as an opportunity to build 150 careers."

Mr Przygrodzki added: "Our intention is to promote from within whilst offering a fast-track to management."