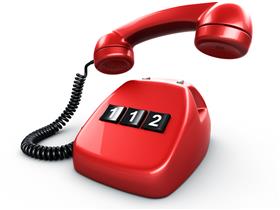 Shimla, India, Dec 4, 2018 -- As many as 8,192 signals have been received by the Emergency Response Support System (ERSS) in the past one week after it was inaugurated by Home Minister Rajnath Singh on November 28.

Out of the total 8,192 signals, 8,078 were non-actionable, while 114 were actionable. Around 6,636 signals were received through calls, 361 through SOS, 115 by messages (SMSes) and two via e-mails, a spokesperson of the state government said here on Tuesday.

The maximum signals were received in Shimla district (27), followed by Solan (15), Mandi (12), while no signal was received in Chamba and Lahaul-Spiti. The highest number of signals pertained to threats (42), followed by accidents (16), while five signals each were received for crime against women and hazardous condition incidents.

Under the system, all emergency numbers, including 100 (police), 101 (fire), 102 (ambulance and disaster response) have been integrated into one number 112. The helpline would be monitored round the clock, DGP SR Mardi said. To create awareness about the ERSS, the police headquarters have uploaded a video on Facebook and YouTube.

Any person in distress, especially women, can call at 112 from landline or mobile phone or use the ERSS application to seek help. As soon as the call or message is received, the global positioning system (GPS) will find the location of the caller. The ERSS also helps in optimal utilisation of manpower to take prompt action on all emergency calls.

Sharing details regarding the functioning of the ERSS, DIG Asif Jalal said call centres were connected with the district coordination centre and emergency response vehicles, which were equipped with mobile data terminal (MDT).

The location of the person in distress would be automatically traced and reach the nearest police station. An emergency vehicle would be rushed to provide immediate help, Jalal added. There was a need to sensitise the general public about the ERSS as out of 8,078 non-actionable signals, 1,195 were irrelevant, 3,621 lacked response, 409 were wrong and 987 were missed calls, police sources said