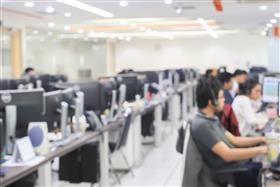 Mendota Heights, MN, Nov, 2018 -- Alorica, the California-based call-center operator, is raising its base wage at its Mendota Heights facility from $12 to $14, as it seeks to nearly double its employment to 650 workers at its local customer-service center.

"We plan to add another 300 people by the end of the year," said Kevin Greer, director of the 350-employee Mendota Heights customer-contact center. "We serve one of the largest retail pharmacy chains in the company and a growing global travel company [from Mendota Heights] and a few other clients."

The $2-an-hour raise will go to all workers and some managers, effectively raising the minimum wage to $14 an hour, plus benefits including health care and vacation, for a workforce that Greer said is mostly full-time. He added that most workers also should be able to achieve a bonus that will add another $1.50 an hour. New employees also are eligible for a two-installment, $500 hiring bonus payable over 60 days.

However, Alorica is the latest example of Twin Cities-area businesses that increasingly must go higher to attract and retain qualified workers in an employee-hungry economy that boasts a historically low unemployment rate. Minnesota's jobless rate dipped to 2.8 percent in October, flirting with an all-time low.

Minneapolis and St. Paul each have established $15 as their new municipal minimum wage, phased in over several years.

That would allow those city governments to pause if sufficient employers make the case that the increase is killing business.

It was only a few years ago that the custodians' union targeted $10 an hour as the wage floor amid the slow job-growth days after the Great Recession of 2007-2009. Today, the Twin Cities has record-low unemployment of under 3 percent.

Increasingly employers are offering starting wages at $12 to $15 or more per hour in factories, banks and offices, even for inexperienced-but-trainable new hires.

Large employers, such as Wells Fargo, U.S. Bancorp and Target (by 2020) have established $15 as the new floor for wages, announcements made after the 2017 federal corporate tax cuts boosted profits.

"The market demands this for us to be competitive," Greer said of Alorica's hikes. "We're trying to grow quickly and we need to distinguish ourselves in the market. And we need to take care of our employees."