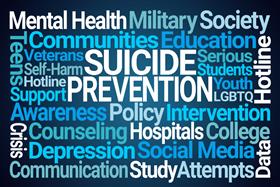 The Arkansas Lifeline Call Center, which is open through the Arkansas Department of Health, is open to use for anyone. The center answers calls made in Arkansas to the National Suicide Prevention Lifeline.

Mandy Thomas, injury and violence prevention section chief at ADH, spoke about the center at the Senate Committee on State Agencies and Governmental Affairs and House Committee on Aging, Children and Youth, Legislative and Military Affairs joint meeting Oct. 23.

Thomas said about 13,000 people called the national hotline that had Arkansas area codes between January and September 2019. She said the center answered about 10,000 of those calls.

In a Nov. 1 interview, Thomas said the center has been open since December 2017. She said phone operators go through over 90 hours of training before taking a call.

"We wanted to make sure we had every possible training we could find before they became call-takers," Thomas said.

Thomas said they receive training for domestic violence, accidental poisoning and much more. She said the center receives calls regarding relationship issues, which can lead to suicidal thoughts, depression, custody battles and chronic pain.

Most of the time, though, they receive calls about suicidal thoughts.

Thomas said the center receives about 1,500 calls a month and has seven people able to take calls — one supervisor and six operators. She said there’s typically three people in the room at the same time.

Thomas said the center also stresses self-care to its call-takers.

"One great thing about working for the state is we have state benefits — it offers counselors, psychologists," Thomas said. "It’s a very important component to being a caretaker."

The department also partners with Veteran Affairs and healthcare systems in order to give the appropriate help and resources.

Thomas said the most important thing if someone you know may be suicidal or showing signs is to ask them.

"Most of the time, that opens up that line of communication for times of crisis," Thomas said.