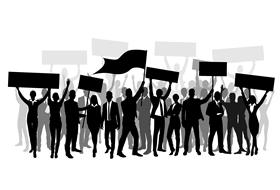 Hartford, CT, USA, March, 2019 -- Told they will have to relocate or risk losing their jobs, Meriden-based AT&T workers are protesting Thursday at the state Capitol to support legislation that would have prevented the telecommunications provider from closing three of its call centers.

The telecommunications provider recently informed workers that certain operations in Meriden would be transitioned to offices in Atlanta, Ga., and Brentwood, Tenn., a move that would shed 89 local jobs. Relocation and severance packages were offered to those impacted.

Their latest rally is timed to coincide with a public hearing on a bill that could change the workers' fates.

The Labor and Public Employees Committee is scheduled to hear public testimony Thursday at 11 a.m. on S.B. 990, or "An Act Concerning Call Centers and Notice of Closure," which CWA said would protect call centers with 50 or more full-time or equivalent employees.

Officials from CWA will testify in support of the measure on Thursday.

AT&T operations in Meriden support 911 networks in 22 states, and CWA argues that closing the local facilities would impact those services. AT&T, however, said the closures will not impact public safety in Connecticut or elsewhere.

The fight to keep the Meriden call centers open has received backing from members of Connecticut's congressional delegation, who recently sent a letter to AT&T CEO Randall Stephenson asking him to reconsider the local closures.

An AT&T spokeswoman previously said the company will still have a Meriden presence at Deerfield Lane, which CWA said are mainly field technicians assigned to the site.

The planned closures in Meriden follow AT&T's announcement in January to close its 150-employee call center in Syracuse, N.Y., according to CWA.

AT&T said it will transition the Meriden call centers over the course of this year.

"We have worked closely with the Communications Workers of America to offer an enhanced $20,000 relocation allowance, which is four times more than required by our collective bargaining agreement," an AT&T spokeswoman said Thursday. "We hope that as many affected employees as possible will elect to stay with us."