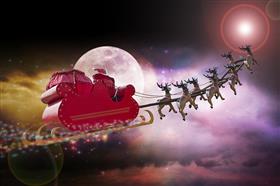 Santa Clara, CA, USA, Dec 15, 2016 -- Boys and girls eager to follow Santa's Christmas Eve travels will be calling a trusted source for timely information: the NORAD Tracks Santa hotline. Poised to answer their most pressing questions, including Santa's estimated arrival time to the amount of weight he gains eating cookies throughout the long night, will be nearly 1,500 volunteers.

Volunteers will use Avaya Customer Engagement technology to respond to the children of all ages who are expected to flood the hotline with calls.

Calls fielded by the volunteers staffing the NORAD Tracks Santa hotline have grown steadily to an estimated 691,000 since Christmas 2009. In 2015, calls from all over the globe during a single 23-hour period set a new record of 141,000 calls, topping the 2014 record of 134,970. Volunteers will be at their posts again this year from 4 a.m. MST (6 a.m. EST) on December 24 through the early morning hours of December 25.

NORAD Tracks Santa began more than 60 years ago with a simple typo. A department store ad promoting a December 24 Santa hotline mistakenly listed the number of an air defense operations center in Colorado. Colonel Harry Shoup was on duty that night. Rather than hanging up, he had his team "check the radar," find Santa's location and share the information with every child who called. Since then, thousands of volunteers and corporate contributors have helped NORAD keep the magic alive -- turning the program into an enduring and beloved annual tradition.

As this year's wait for Santa begins, NORAD has posted family-friendly games, videos and information about Santa at www.noradsanta.org. Details about Santa's travels will also be available on December 24 through social media, including www.youtube.com/noradtrackssanta, https://twitter.com/NoradSanta and https://www.instagram.com/noradtrackssanta_official/.

"We are very proud to have our technology serve the world's children, many of whom have the same question -- "Where's Santa?" Avaya Government Solutions is pleased to help the North American Aerospace Defense Command keep the NORAD Tracks Santa tradition alive for Santa fans around the globe. Every day, we are proud to support NORAD's overall mission."

North American Aerospace Defense Command is a combined organization of the United States and Canada that provides aerospace warning, air sovereignty, and defense for Northern America. Headquarters for NORAD and the NORAD/United States Northern Command (USNORTHCOM) center are located at Peterson Air Force Base in El Paso County, near Colorado Springs, Colorado.