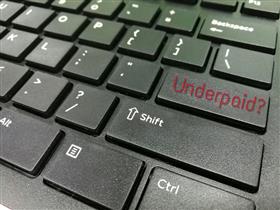 Ballarat, Australia, Sept, 2020 -- Workers at Ballarat's IBM call centre have been unfairly paid, according to the workplace watchdog.

The tech company has handed back $12 million to its Australian employees after underpaying them for eight years.

As of February, 1647 workers across Australia had been back-paid a total of $12.3 million for underpayments going back to 2012, the Fair Work Ombudsman says.

More underpayments are still being identified and IBM must repay all employees by October 16 as part of an enforceable undertaking signed with the ombudsman.

A significant number of casuals at IBM's Ballarat contact centre were also paid the national minimum wage, instead of higher rates under the call centre award, which is reportedly about eight per cent more than the minimum wage - or $21.54 an hour.

National Tertiary Education Union organiser Colin Muir said he was aware of at least one person in Ballarat who had received some money back from underpayments.

"There's extreme disappointment in a company like IBM who failed to detect a relevant award and defaulted to national minimum wage. They are a global company with teams of human resources - you can't tell me that's a mistake," he said.