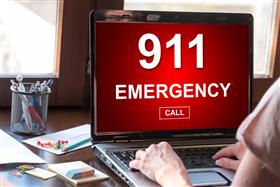 Bedford, MA, USA, May, 2018 -- Chief Robert Bongiorno is pleased to announce the Bedford Police Department has implemented a more modern system that will direct all wireless 911 calls dialed in town directly to the department’s dispatch center.

Bedford Police will now receive all Verizon, AT&T, T-Mobile and Sprint 911 calls originating from cell phones geographically located in Bedford. Prior to this change, calls from mobile phones first went through a regional call center. The change reduces the amount of time it takes to initiate a police, fire or emergency medical response while only slightly increasing the department’s daily call volume.

"Research shows that decreasing the number of call transfers allows us to arrive at the scene of emergencies faster," said Bedford Police Department Lead

Emergency Communications Officer Jeffrey Vinciulla. "The seconds we save by using the new Wireless Direct program will make an impact on all who call 911, especially those facing life-threatening situations."

The Bedford Police Department is one of just a handful of police departments in the state to have made the switch to the wireless direct program. It will prove to be invaluable to keeping the community safe from its start.