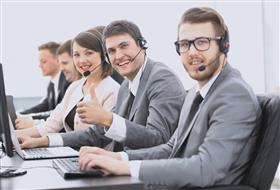 Since Mackenzie Health outsourced operation of its 24-hour call centre some 10 years ago, the new members are employees of multinational Sodexo, although they wear Mackenzie Health insignia.

The chair of the OPSEU's Hospital Support Division, Jill McIllwraith, said the union already had a large presence at Mackenzie Health and was well regarded. "The new workers will join about 1,000 other OPSEU members, including two bargaining units of paramedical staff. They saw the excellent representation the union provided, and they wanted to enjoy some of the benefits it brought."

When the call centre was outsourced, Sodexo made drastic cuts to employee compensation, noted McIllwraith. "The workers paid a steep price. Their pay was slashed and all benefits were eliminated. Their loss was Sodexo's gain, a corporation with billions of dollars in annual revenue.

"The workers are also looking for some job security," she continued. "Of the 16 workers, only five are full-time. The other 11 are precarious workers, whether fixed-term, casual or on-call. These are all issues that OPSEU will address when it comes to negotiating a collective agreement."

The President of OPSEU was very pleased by the result of the vote. "Working in a call centre is one of the hardest jobs imaginable," said Warren (Smokey) Thomas. "When it's in a busy and stressful health care setting, it's even harder. I understand that these workers spend four months just learning their profession.

"They love the work they do, but they must be paid fairly. When they got outsourced, most were made precarious workers earning a fraction of what they made before – just so a wealthy corporation could get even richer. That's what privatization is really all about.

"So I warmly congratulate our new members and assure them of our support and our expertise, as well as the solidarity of 150,000 other members, as they prepare to negotiate a first contract."

Mackenzie Health provides health care services through the Mackenzie Richmond Hill Hospital and operates urgent care centres in Oak Ridges and Maple, as well as a facility in Barrie.