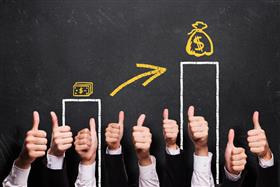 London, England, Sept 12, 2019 -- Capita, the outsourcing company behind the London congestion charge and the BBC licence fee, is giving almost 6,000 UK workers a pay rise, offering staff the real living wage as a minimum from next April.

The company said all of its 40,000 UK employees, from administrative staff to construction, health and call-centre workers, would be paid, at least, the independently verified real living wage. The real living wage is £10.55 an hour in London and £9 an hour across the rest of the UK.

The rates are overseen by the Living Wage Commission and calculated annually by the Resolution Foundation as the basic income needed to cover the real cost of living.

Capita’s staff are at present paid, as a minimum, the national living wage – the legal minimum. This means people aged over 25 get £8.21 an hour, but those under 18 receive just £4.35 while apprentices get £3.90.

Capita is working towards full accreditation with the Living Wage Foundation by reviewing plans to extend the policy to regular sub-contracted staff. However, apprentices will not get the new rates.

The Unite union welcomed the pay rise but said Capita had "missed an opportunity" by delaying the introduction of the real living wage until next April.

Gail Cartmail, assistant general secretary of Unite, said: "An immediate pay uplift would have helped assuage worries about the impact of a hard Brexit on the day-to-day cost of living that all low-income families fear. These legitimate fears are compounded by the revelations in the government’s Operation Yellowhammer document that a no-deal Brexit could see rises in food and fuel prices."

Capita’s chief executive, Jon Lewis, who is overseeing the second year of the company’s turnaround plan, said: "Capita’s employees are the lifeblood of the business … paying UK employees the real living wage is a tangible demonstration of our commitment to responsible business."

Other companies that pay the real living wage include the retailers Ikea and Burberry, the insurer Aviva, the law firm Linklaters, and the Nationwide building society, among 5,668 employers accredited with the Living Wage Foundation.

The supermarket discount chains Aldi and Lidl also pay the real living wage, but are not formally accredited to the scheme because not all workers are guaranteed the rate as a minimum. To achieve certification as a living wage employer, companies must pay outsourced workers the same rates.

A year ago Amazon responded to criticism and labour shortages by raising its minimum wage for British and American workers. In the UK 40,000 permanent and temporary staff got an increase to £10.50 an hour in London and £9.50 outside the capital.