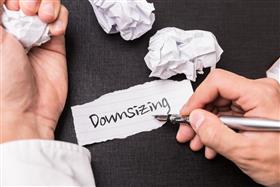 The cuts will come from the company's service operations, which support the credit card call center, spokesman Sie Soheili said Wednesday in an email. Investments in digital tools have improved customer service, allowing people to resolve issues themselves, Soheili said.

"Even while our business has continued to grow, call volumes continue to decrease as customers increasingly self-service through a mix of our digital tools and contact center calls," he said.

There are 7 million unemployed and 6.2 million job openings. What's the problem?

Employees were given at least 16 weeks' notice and are encouraged to apply for other positions within the company, Soheili said. Laid-off workers are eligible for a severance package that includes retraining assistance and can receive coaching in interviewing and resume writing.

The workload that would've been handled by the laid-off employees will be taken on by existing locations, Soheili said.

The McLean, Va.-based bank employs about 1,900 people in the Chicago area, he said. More than 600 employees, mainly in tech and digital positions, will remain in Rolling Meadows.

About Capital One Financial Corporation:

Capital One Financial Corporation is a holding company whose principal subsidiaries, Capital One Bank and Capital One, FSB, offer loans and loan-oriented products. More than 6,500 call center agents provide Capital One customers with a variety of information related to their accounts, from account status to rules, policies and procedures.