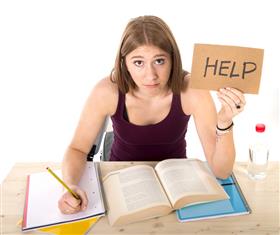 New Delhi, India, April 8, 2019 -- Specialised audiovisual presentations on issues affecting youth, a toll-free helpline for students, an interactive voice response system - that is how the CBSE helped students counter the board exam stress this year. According to the Central Board of Secondary Education (CBSE) public relations officer, Rama Sharma, as many as 12,000 calls were received on the interactive voice response (IVR) service, which was a new feature introduced this year.

Through the IVR system, students, parents or stakeholders can obtain pre-recorded useful information on tackling board exams which included tips for better preparation, time and stress management, frequently asked questions, along with live-tele-counselling services.

With the introduction of the IVR system, the board saw a considerable decline on the calls received on the toll-free helpline in the first phase of counselling, which commenced on February 1 and ended on April 4. The second phase will begin after the board results are declared.

The board had roped in a total of 87 counsellors, comprising 65 from India, two special educators and 22 from foreign schools. The helpline got more calls from students as compared to parents.

The helpline also received more calls from students of private schools as compared to government schools.

"This has been the trend every year with more boys calling up than girls. It is difficult to understand why, but it might be because the boys are a bit distracted and usually start preparing at the last-minute causing them to stress more. Girls, on the other hand, are more organised when it comes to studies," another official said.

"Many a time, students used to call and say, 'Please talk to my parents. They are reprimanding me and pressurising me'. Students have even called up to say they are distracted and are not able to concentrate because they had a break-up," the other official said.

Some students even had suicidal thoughts and said they were "feeling like killing themselves" and some others even said they did not want to pursue a particular stream, but were being forced to do so by their parents, he said.

For the first time, a comprehensive audiovisual presentation titled 'Knowing Children Better' was prepared and uploaded on the CBSE's website and other social media platforms. The presentations were on issues like tackling exam anxiety, internet addiction, substance abuse, depression.

According to Sharma, the presentations received 75,000 hits on YouTube, while 92,000 views on Twitter with the presentation on tackling exam anxiety getting the maximum number views.

The board had also prepared a course compendium for students. The compendium of courses after class 12 was an earnest effort of the board to facilitate students while scouting for right course choices, the board had said.

The compendium featured traditional courses like engineering, chartered accountancy, medicine, while also details and eligibility criteria for unconventional subjects like how to become a detective, artificial intelligence, robotics, among others.

About Central Board of Secondary Education:

The Central Board of Secondary Education (abbreviated as CBSE) is a Board of Education for public and private schools, under the Union Government of India.

More Editorial From Central Board of Secondary Education