News : City’s Helpline for Elders Now Gets 150 Calls a Day 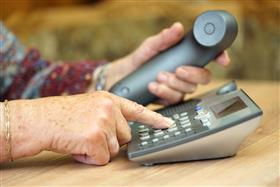 Bengaluru, India, Nov, 2018 -- The helpline for elders (1090) receives about 150 calls a day. The callers are mostly above 55, and seek help for a variety of problems. The maximum number of complaints, in the last three years, have been about harassment and abuse within the family.

From 188 in 2015-16, complaints have gone up to 233 in 2017-18. Rakshitha, senior counsellor with the helpline, says, "We get some calls from elders seeking details about various government schemes. But most calls are about harassment by family members, property disputes, and financial cheating."

Many who call in are in fear and depression. "They need at least three or four counselling sessions to return to a calm state of mind," she says.

Old age homes are also registering a steady rise in the number of inmates. Keshav Kumar, the supervisor at Sri Chaithanya Old Age Home in JP Nagar, 5th Phase, says the elderly are often helpless. "Some aren’t married and so have no family; others are dropped off by children who can’t take care of them," he told Metrolife.

In many cases, the children are working and have no time, or feel the parents have become difficult to handle. "We had one case where this man was constantly hungry and had to be fed every five minutes. His family found this a problem and dropped him here with us," says Keshav. Many need treatment for depression. "We keep them engaged simultaneously in three or four activities, like dance and yoga and light exercises. We have noticed that their health improves and they become more confident when they become active," he says.

Where cops step in
Police mostly deal with two complaints: seniors being cheated of their money, and seniors complaining of neglect. "The cheating cases are be dealt with like any other," a senior policeman says. Elders are neglected, or abandoned after they write away their property. Booking criminal cases against sons and daughters-in-law for neglecting aged parents worsens the matter, he says, because then they completely give up on their responsibilities. "This is where counselling plays a part," he says.

Rs 25 lakh gone
Vikram, 75, booked a flat after paying Rs 25 lakh in two instalments. After a two-year wait, he discovered he had been cheated and there was no apartment in the first place. He was on the brink of suicide when he was rescued.

Abandoned
Savitri, 75, was abandoned by her younger son after she handed over all her money and jewellery, to him. She was found begging. She was later taken home by her elder son.

Bad tenants
Simon, a retired doctor, had rented out a portion of his house. The tenant slowly stopped paying rent and refused to vacate. He would harass the owner and use abusive language against him almost every day. He contacted the helpline and they came to his rescue.