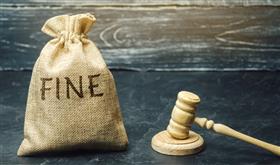 The Information Commissioner’s Office (ICO) said that Call Centre Ops of Nottingham and House Guard of Bournemouth were found to have made almost 860,000 illegal calls between them, resulting in complaints to both the ICO and the TPS.

It is against the law to make marketing calls to numbers that have been registered with the TPS for more than 28 days, unless people have provided consent.

The ICO’s investigation found that Call Centre Ops, a marketing company, made 159,461 unsolicited direct marketing calls between May and October 2019. It has been been fined £120,000.

Someone who received a call from Call Centre Ops complained: "Claimed not to be a sales call, but wanted to sell life insurance. Told firmly I was on TPS and they had no right to contact me, to which they answered it didn’t apply as it wasn’t a sales call. Obviously told them quite firmly what I thought of them."

House Guard of Bournemouth, which provides masonry protection solutions, was found to have made 699,966 nuisance calls between May and December 2018, over half of which were to TPS-registered numbers. It has been fined £150,000.

Someone who received a call from House Guard said: "I was busy doing my work and expecting a call from a client when the nuisance call was a rude and annoying interruption."

Andy Curry, ICO head of investigations, said: "If you sign up to the TPS, you should not expect to get nuisance calls. It’s as simple as that."

He added: "By complaining via the TPS and the ICO, the public help us hold these companies to account. We encourage people to sign up to the free TPS service and report any unwanted calls they receive to the ICO."

The TPS is a free service for mobile and landline phone users that allows people to opt out of receiving cold calls. The ICO became responsible for overseeing the TPS in December 2016.

To comply with the law, companies carrying out electronic marketing should subscribe to the TPS to receive the register of subscribers to screen against their own call lists.

People who believe they have been the victim of nuisance texts, calls or emails can contact the ICO via live chat or call its helpline on 0303 123 1113.