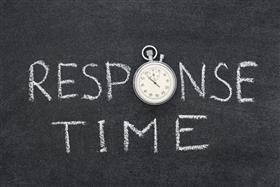 Sussex, England, Feb, 2019 -- Four in ten people simply give up trying to report information to the police after they are left hanging on the phone, figures show.

But because of the long wait to be answered, many are simply abandoning their calls – which could be costing the police important clues and information to solve cases.

Sussex Police and Crime Commissioner Katy Bourne said she has been left "frustrated" by the force, and said she has spent the last 18 months going "blue in the face" to improve how the calls to 101 are handled.

It was also revealed that while the force meets a target for officers emergency response times, it is taking them up to three hours to respond to other matters such as reports of antisocial behaviour in their neighbourhood.

Mrs Bourne quizzed Deputy Chief Constable Jo Shiner and Assistant Chief Constable Nick May about the latest figures at a performance and accountability meeting on Friday.

She said: "You know my frustration and you know the public are really, really unhappy.

"I have spent the last year to 18 months going a bit blue in the face, promised and promised that things are being done.

"I understand why you say that there has been good work done before you arrived, but actually there has not been, if I’m honest."

The average 101 call response time for Sussex Police was 12 minutes.

Figures for Kent Police show it is one minute and 38 seconds and in Surrey it is 48 seconds. Though it is not clear if the same figures were being compared.

Deputy Chief Con Shiner said police council tax rises will be spent on improving technology at the call centre to improve the way emergency and non-emergency calls are dealt with.

Meanwhile Assistant Chief Con Nick May said patrol car response times for the most serious 999 calls is at 15 minutes, but said no force in the country works to precise targets, with the priority instead being for officers to drive safely and effectively.

But he said the responses to second grade priorities is two hours and 57 minutes.

The second tier callouts can include responding to antisocial behaviour, domestic violence cases, and searches for missing people.

The assistant chief constable said the figure was down to the pressure of an ever-growing number of callouts to help find vulnerable and missing people.

He said on average officers can take seven hours in the searches, which are often "complex" and require trips to hospital or contact with mental health services.

"The demand for missing people has risen substantially over the last three years, and that is a trend we expect to continue," he said.

Sussex Police is the territorial police force responsible for policing the county of Sussex in southern England (which for administrative purposes is split into East Sussex, West Sussex and the city of Brighton and Hove). Its headquarters is in Lewes, East Sussex.