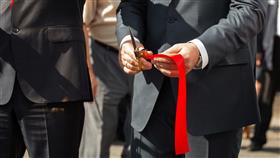 Lancashire, England, Dec 8, 2016 -- A helpline for the UK’s most vulnerable people celebrated its move to a sparkling new office with a cash boost.

The helpline, which provides friendship and advice to older people, was awarded a cheque worth £600,000 from the People’s Postcode Lottery at the event.

The Silver Line founder Dame Esther said: "This is great news for all the lonely or isolated older people who rely on The Silver Line around the clock, every day of the year.

"This is a superb office with an incredible view and the people here are the salt of the earth.

"The sound of the team as they speak with people is warm, friendly and welcoming. It’s fantastic and I couldn’t be more pleased.

"We all want to reach out to older people but once they become isolated it becomes a vicious circle. The front door becomes a brick wall and they can’t get past it.

"Once loneliness sets in it can lead to health problems, depression and even suicide.

"I want to thank the whole team here and also all our supporters who have helped us come together to reach out."

The Silver Line operates 24 hours a day, every day of the year. Since its launch in November 2017, the helpline has received more than one million calls from older people who feel lonely, isolated or confused.

The charity relies entirely on donations and needs to raise £5m every year to keep going.

The Silver Line chief executive Sophie Andrews said: "The move to the new base is an important part of ensuring our future sustainability.

"It helps reduce the running costs of the helpine, while also allowing us to move faster to train staff with new skills."

Blackpool mayor Kath Rowson, who attended the celebration, said: "The Silver Line is a simple idea, but like many simple ideas it’s one of the best.

"I’m proud that Blackpool has been chosen for such a wonderful idea.

"My own husband died a few weeks ago, so I know how lonely it can feel when you go home and it’s night time.

"My husband was always there when I got home.

"Some people in this globally mobile world have no family or friends they can rely on, and this is such a wonderful way of helping them."