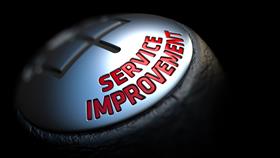 Dayton, OH, USA, Jan 19, 2020 -- The city of Dayton will open a new call center later this year that officials say should reduce wait times and hopefully will result in fewer unhappy callers and abandoned calls.

Dayton officials say they think the city can do a better job of serving callers.

Last year, about one in 15 calls to the public works call center were abandoned, and average wait time of answered calls to the finance department was about 1 minute and 40 seconds, city data show.

For many citizens, their only interaction with the city takes place when they call public works or the finance department to pay utility bills, report issues or seek help addressing other questions and needs, said Dayton City Manager Shelley Dickstein.

Too often, citizens’ experiences are subpar, she said.

"We are not strongly performing in that area," Dickstein said.

But the new call center will be much more professional, with higher standards and better accountability, and staff will get useful training and will work in a much-improved environment, Dickstein said.

Poor experiences on the phone aren’t staff’s fault alone, because they have worked in a substandard environment with dated technology and didn’t have sufficient training or direct supervision focused only on call center performance, Dickstein said.

The city wants to reduce call wait times as well as the number of callers who hang up out of frustration after being put on hold or when their calls go unanswered, Dickstein said.

Through the end of the third quarter of 2019, all calls the city’s finance department answered had an average wait time of 1 minute and 40 seconds, city data show.

That was a significant improvement from 2018, when the average wait time was almost 3 minutes. The finance call center answered more than 79,200 calls through the first three quarters of 2019.

Public works, however, did not meet its goal of answering 98% of calls within 1 minute and having an abandoned call rate of 2% or less, said Fred Stovall, Dayton’s director of public works.

Stovall said staffing changes was one of the main reasons the department fell short of this target.

The finance department has a call center to handle billing. These centers will consolidate into a renovated space in City Hall.

The city will pay close attention to whether call takers were professional, helpful and courteous and that callers had a satisfactory experiences, Dickstein said.

"The benefit primary will be enhancing customer service," Dickstein said. "We have room for a great deal of improvement."

Dayton Mayor Nan Whaley said citizens usually call the city when they have issues or problems, and the new call center hopefully will mean fewer callers will need to be transferred and have to bounce around to get their questions answered.

The lion’s share of the calls the city receives are about water bills, streets and trash, and the new center is an opportunity to make it is easier to provide assistance and service, the mayor said.

"You won’t have to call around as much, which is really annoying to people," she said.