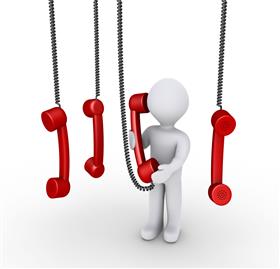 Dublin, Ireland, July 14, 2021 -- A temporary call centre for people who have queries relating to their Digital Covid Cert received 4,000 calls on its first day on Monday.

A larger call centre with 60-90 operators dealing with all aspects of the system is due to become operational from next Monday but a temporary call centre comprising 25-30 operators is currently open.

The DCCs are being sent out to people who are fully vaccinated as part of Ireland’s adoption of the EU-wide system from next Monday 19 July.

Speaking to the Oireachtas Transport and Communications committee today, Minister of State for eGovernment Ossian Smyth gave details of the temporary call centre that deals with queries relating to people who have received their cert.

The number for the temporary call centre is on the cover letter people receive with their DCC.

"That’s really if you have some emergency problem rather than having to be pushed up the list or just general questions. It’s being been run by Revenue and Welfare," Smyth said

Government Chief Information Officer Barry Lowry qualified that figure by saying that the 4,000 figure referred to people who called on the first day of operation on Monday.

He added that most of the people who called up did not stay on the line to speak to one of the operators but listened to the Interactive Voice Message (IVR).

"We’re hoping that that’s a sign that actually the IVR give them the information they wanted rather than they got fed up waiting," he said.

Asked to clarify the number of those who hung up, Smyth said: "I think that 1,200 people continued to speak to an operator rather than giving up at the IVR stage."

However, one caller to the line told The Journal that the initial IVR message didn’t have any useful information other than the government website.

"I was on hold for over 30 minutes from about 8.45am and was about to hang up when the call was answered. I was ringing about an error in my certificate. Once I got through they sorted the issue out really quickly and said they’d reissue my certificate next week," she said.

She believes most people would have given up and hung up before 30 minutes.

The IVR message tells calls that information is available on the gov.ie website and that digital Covid certs are currently being sent out by email and post. It also advises callers that the helpline is prioritising callers who want to travel in July.

Smyth also provided the latest figures on the number of DCCs sent out to date, stating saying that the government is "ahead of schedule" in the sending of DCCs by email.

Those who were vaccinated through the HSE’s online registration portal will receive their cert via the email they used as part of that process.

People who were vaccinated through a GP or pharmacy are more likely to receive their cert in the post.

Smyth said today that about a million DCCs were to be sent via email and about 900,000 via letter.

Of the letters, Revenue is sending them out as part of the programme and are doing so at a rate of about 50,000-70,000 per day, with this rate expected to be ramped up over the weekend.

Lowry said it is expected that 90% of the 900,000 letters would be received by next Monday.

Smyth said that he was "very happy" with the low bounce rate and that those people are likely to have to call up the DCC call centre to receive their cert.

"When you have a database of emails and more than 99% of them are delivering, that’s an incredibly high quality dataset," he said.

"I’m really happy with that bounce rate, it does mean that those people, 7,500 people, presumably will be contacting the call centre looking for a reissue and we will facilitate them in that way."

Speaking about those individuals, Lowry said these people may be contacted by post if "robust addresses" are available but that they can otherwise contact the call centre.

The call centre is set to be live from next Monday and will be manned by 60 to 90 agents. The call centre will be operated from Ireland but some of the agents may be in the UK.

"The call centre will work electronically, so all of the staff will not necessarily be congregated in one place," Lowry told the committee.

The 1.9 million figure mentioned above relates to people who are confirmed to be fully vaccinated.