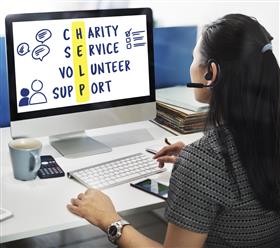 Dorset, UK, June, 2020 -- Dozens of computing volunteers have been helping people in Dorset see their loved ones for the first time in months thanks to an IT helpline.

Dorset Digital Champions switched to a telephone service in March after it was forced to cancel face-to-face sessions.

Advisers said they had received some challenging and heartbreaking calls from people wanting to get online or use video conferencing.

Those using the phone service have said they "would be lost" without it.

The Dorset Council-run scheme involves about 75 volunteers who, before the pandemic, offered IT sessions in libraries, helping about 200 people a month.

Volunteer Andy Taylor, who previously ran sessions in Sherborne, admitted to getting "a little warm feeling" when people he had helped with video calls were finally able to see and speak to their families.

He said: "The typical call is from people wanting to use Zoom but there has also been much more serious stuff.

"One person who we are still trying to help has no broadband, is poorly covered by mobile phone signal and that's a really challenging problem at the moment."

Team leader Penny Syddall said: "Some of the calls are heartbreaking - people living alone whose husband or wife are in a care home and they have gone from seeing them regularly to not seeing them for two months."

She said: "It's not the same as being face to face but it still makes such a difference. I would be lost without it.

"I'm now emailing at long last. I look things up on Google and do some online shopping. My main communication is with my church, which has helped me quite a bit."

The helpline is open to Dorset residents on weekdays between 10:00 and 12:00.

Today's Tip of the Day - Cultural More Than Technical