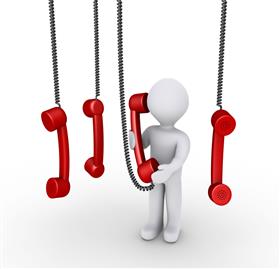 Officials of Dubai Police’ Command and Control Centre said during the third quarter of 2019, Dubai Police’s emergency hotline 999 received 1,643,493 calls compared to 1,733,896 calls received during the same period the previous year. Moreover, the total number of calls answered within 10 seconds were 1,631,989 calls in comparison to 1,557,946 calls during the same period last year, thus achieving 97 per cent on the emergency response indicator for answering emergency calls within 10 seconds.

Dubai Police’s commander-in-chief also reviewed the response of the 901 call centre, where the total number of received calls reached 121,785 calls during the third quarter. Of them, 78,423 calls were answered within 20 seconds, in comparison to 97,361 calls received during the same period last year, of which 83,635 calls were answered within 20 seconds.

At the end of the meeting, Al Marri called upon staff members to fulfil their job requirements in a timely and accurate manner, to improve business quality and performance to upgrade work standards to the highest levels. He also urged the public to understand the difference between 901 and the emergency hotline 999 and be more mindful of the calls they make to the hotline.