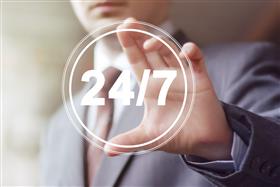 Dubai, UAE, May, 2019 -- Motorists will now have an additional channel to get their driving related transactions done at any time of the day or night as the Roads and Transport Authority launches I-Counter, a mini smart and integrated customer service centre, which can be easily relocated.

Similar to smart kiosk, the I-Counter enables clients to make self-service transactions round-the-clock, processing all transactions that can be availed via the Smart Kiosk, except for cash payment and printout of transactions.

Services offered through the I-Counter include making inquiries, payment of traffic fines, licensing/renewing of vehicle registration, and issuing/renewing driver license.

Soon, RTA is planning to add more services such as the refund of payments and the top-up of Nol cards/seasonal parking cards.

Launching the new facility that serves customers in five languages (Arabic, English, Malayalam, Urdu, and Chinese), Mattar Al Tayer, Director-General and Chairman of the Board of Executive Directors of Dubai’s RTA, stressed on the authority’s relentless efforts to harness smart technologies for people’s convenience.

In the next phase, RTA plans to deploy the I-Counter on board of 700 taxis, apart from having the machines at customer happiness centres at Al Barsha and Al Tawar, centres of RTA service providers and malls.
Performance Indicators

According to the RTA, Smart Kiosks or self-service machines have been a big hit since their launch a couple of years back.

Overall, more people are using smart channels to complete their RTA transactions, with more than half a million people using the RTA’s smart apps, website and call centre to process their applications such as licence renewal or vehicle registration.