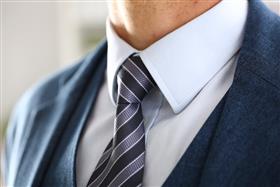 Brussels, Belgium, Nov 7, 2017 -- In two years, he built a team of 200 people from scratch. For the last nine years, he’s been with us – first as the manager for our application development centre and then as regional director in Brazil. Over his career, he’s started up three IT businesses – starting the first one when he was 20 years old and his second had 20 employees by the time he was 23 years old. He has a degree in System Analysis, post-degree in Marketing and an MBA.

His name is Farlei Kothe, and he’s our new vice president of EMEA – in charge of our Application and Innovation Services, with business sales, pre-sales and delivery team as well.

Farlei’s journey has been extensive and undeniably successful. But getting there was not without risk and hard work. After he graduated, he realised he was becoming too technical. He decided he needed to switch to the other side of things. A decision he didn’t take lightly.

‘You cannot move back,’ he explains. ‘The IT environment changes so fast you have no time to relearn.’

It was a decision that ultimately paid off, and led him down this path. He took many courses, mainly about business and people management, culminating in his MBA: the moment he realised he’d finally made the switch.

His next big challenge was moving from being an entrepreneur to someone else’s business.

‘I wanted to work for a powerful company, with big teams, challenges, numbers and international projects,’ he says. ‘I was good with people, and wanted to manage a team with 50, 100, 200, 500 people. Something quite hard to achieve in my own company with a local focus.’

In 2009, Farlei joined us and in two years had already proved his decision was right. He was managing 200 people and making us money. In a few short years, we promoted him.

His last big decision was to uproot his life, and move from Brazil to EMEA. He aims to grow our application services team from 330 people to 500 in 2018 and to start the new division: Innovation Centre. We’re excited to see the results.

‘I like to work, play, cook and do everything in an intensive way,’ he says. ‘Some people say I’m working too much, other people will say I’m playing too much. Some have told me they can’t understand how I can work the full day and still have energy to play Padel, or go to the gym, or prepare a good dinner for my family or friends.’

He adds: ‘I’m happy when I’m doing something. Simple.’

IT Outsourcing services ranging from staffing to applications to Infrastructure support

Today's Tip of the Day - Look After Your Agents