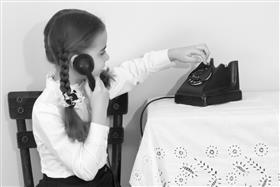 Visakhapatnum, India, June 7, 2017 -- Even as the number of calls receive through the security helpline no 182 of Indian Railways is on the rise, majority of them turn out to be prank calls by youth and children.

Of around 60 calls received through the helpline everyday, only five to six are related to genuine complaints by passengers, the officials of the Railway Protection Force (RPF) of Waltair railway division manning the services say.

The Indian Railways has set up the 182 toll-free helpline for the passengers on board to provide speedy assistance in case of thefts, harassment, pick pocketing or other criminal activities on running trains.

However, the officials say that majority of the calls received from the passengers on board are related to thefts or unauthorised persons travelling in reserved coaches.

The helpline, since its launch in October 2014, has so far received more than 200 complaints pertaining to security issues. As soon as a call is received, the RPF personnel posted as escorts on various trains or those deployed in the nearby stations are alerted. After attending to the complaints, the personnel report back to the helpline with the details of the action taken report.

In case there is an overlapping in network connections after the trains cross Duvvada Station, there are three lines at Vijayawada, Sambalpur and Khurda Road through which the calls are received, before being routed to the Waltair railway division, explains Ibrahim Shareef, senior division security commissioner of Waltair railway division.

However, most of the calls received through the toll-free number are not genuine. "We get at least 60 calls in a day now, of which at best five are related to security, while the rest are prank calls by children. Since it is a short code, we get calls from the city too," says Ibrahim Shareef.

Asked about whether there is a mechanism to trace the pranksters, he says the ongoing routing works can be a solution.

Indian Railways is an Indian state-owned enterprise, owned and operated by the Government of India through the Ministry of Railways.