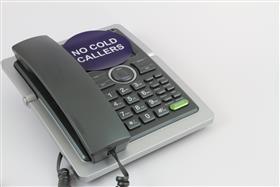 Hong Kong, May 4, 2017 -- The government should force cold-callers in the city to have certain digits at the start of their phone numbers, so Hongkongers can recognise them and ignore the call if they want, a legislator has said.

That came after a doctor posted online about a woman who ignored 17 calls from hospital staff who were trying to tell her her husband had been in a car accident.

She had assumed they were telemarketing calls.

Information technology sector legislator Charles Mok said the government should step up regulation via measures like licensing, setting up a centralised "do-not-call" registry and mandating identifiable phone number prefixes that only cold-callers would use.

"Of course, this would affect the industry, but for users and residents, this would be most welcome, and certainly none of these calls would be from the hospital," he said on a radio programme on Thursday.

The story about the ignored hospital calls came from a popular Facebook page about daily life in A&E.

The April 29 post drew more than 3,800 likes and 693 shares. According to the post, which has not been verified, a taxi driver was hurt in a car crash and needed surgery. He asked hospital staff to call his wife, but when they did she kept ignoring the call, thinking it came from a cold-caller.

At the 18th attempt she was persuaded it was not a sales call, but by that time her husband had been rolled into surgery.

"Fraudulent calls do not only scam you of money, they also undermine trust between people and delay the delivery of important messages," the last line of the post read.

The government is set to launch a public consultation on the regulation of person-to-person (P2P) telemarketing calls in the next two months.

Currently, the Unsolicited Electronic Messages Ordinance regulates only pre-recorded phone messages, faxes and emails. P2P callsare excluded from the regulatory ambit "to avoid affecting the development of normal electronic marketing activities", according to the government.

"If they introduce regulation, they could consider normalising this [accreditation] system," Chan said.

More Hong Kong people receive cold calls, but many hang up without listening to the message, according to survey

Call recipients, he added, should also be allowed to select which specific industries they do not want calls from if the "do-not-call" registry were to be extended.

A survey commissioned by the Office of the Privacy Commissioner for Personal Data in 2014 found that there had been a growth in P2P calls, with more people responding negatively to the calls and fewer reporting any gains from them.