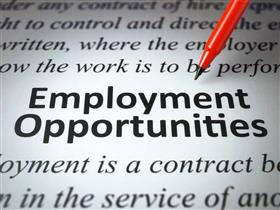 Sydney, Australia, March 25, 2020 -- With new lockdown regulations being announced every day, hundreds of thousands of jobs are being lost around Australia.

Queues outside Centrelink offices continue to stretch around blocks as business after business stands down its workers.

However, that’s not to say there are no new job opportunities. In fact, some industries are hiring workers en masse to meet unprecedented demands.

"Through Service NSW, which will ensure a coordinated information process for the community, [we] will have an extra 1,000 staff to support the government in that process," Berejiklian said.

"We’re also seeing a rise in the need for nannies and tutors, as parents and carers who now need to work from home look for additional support in the home with care and education," Banks said.

"We know that businesses are talking to one another. Where they have to lay off workers they are identifying skills that can transition into companies that have in-demand roles to keep people employed."

Following challenges operating call centres in the Philippines and India, Telstra announced they will halt scheduled job cuts for six months and will be bringing on 1,000 additional Australian workers. These jobs will be temporary and they have encouraged recently stood-down Qantas workers to apply.

Similarly, it appears the Woolworth Group is trying to meet increased supermarket demand by hiring Qantas and Jetstar workers, and redeploying employees from their licensed venue businesses.

"Our immediate priority is redeploying our [employees] impacted by this week’s mandatory hotel closures. We have already placed a large number of those impacted into roles within BWS, Dan Murphy’s and Woolworths supermarkets and will continue to work on that in the days ahead," said Woolworths Group chief people officer Caryn Katsikogianis.

For those with some mining-related experience, BHP is offing 1,500 addition six-month contracts at its iron ore, coal and copper operations.

"As a solution to the need for social distancing in parallel with the ongoing need for resources, the firm is looking to create smaller teams working across different shifts." a BHP spokesperson said in a statement.

With people increasingly confined to their homes, and cafes and restaurants only allowed to operate take-away services, the demand for home food delivery is at an all-time high.

Food delivery companies are generally an option for anyone with a car, motorbike or e-bike.

"We’re working hard to ensure we can efficiently meet the needs of restaurants that are increasingly relying on online ordering and delivery," said a spokesperson for Menulog.

"This means ensuring we have the right number of courier partners to help deliver meals to people in areas all over the country."

Workers are also still in demand on farms and in packing sheds.

For many years Australian farms have relied on backpackers and guest workers for the hard physical labour of picking fruit and other harvest jobs, but now the newly unemployed are seeking jobs anywhere they can be found.

Ben Rogers, the workplace relations manager for the National Farmers’ Federation, said there had been a number of requests from the public asking about farm work.

"We haven’t been affected the way some industries are … if they are interested in doing the work, and let’s be frank it can be difficult work, then there are jobs."

The fruit-picking labour force in Australia is heavily reliant on migrant workers, primarily backpackers and Pacific Islander on the seasonal worker program.

Rogers said if these workers weren’t granted visa extensions then farms would struggle to complete their harvests, and there would be even more jobs needing to be filled.

While these positions are generally low skilled and suitable for most able-bodied workers, there are complications with people travelling from cities to farming communities.

"Accommodation is always a bit of an issue and we know that a lot of the hostels that backpackers are staying in are closing due to fears around the virus," Rodgers said.

"With less tourists there are hotels, but if someone wants to come and work but stay at a hotel, I’m not sure."

The Harvest Trail website is a government resource to connect farmers with labourers.