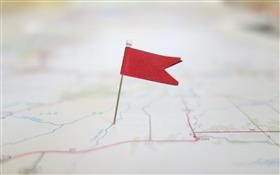 Lincolnshire, UK, Nov 13, 2019 -- Police officers in the Stamford, Bourne and Deepings area are using a new app to help pinpoint people in need.

Each square is allocated a unique three word address, which allows people to refer to their exact location no matter where they are.

"When incidents are reported, there is sometimes no easily identifiable landmark or postcode.

"Trying to establish exactly where these people are can result in valuable minutes being lost."

He added: "I would ask everyone who has a smartphone to download the app.

"Ask your family, friends and neighbours to download it."

The technology has already been rolled out across other forces and has proved a vital tool for locating people in an emergency.

In one incident, Bedfordshire Police used what3words to locate a mother and child who had been involved in a car accident.

The mother had no idea where she was but was advised by the call centre to download the what3words app via a link sent to her phone.

By giving them her three unique words officers were led straight to her.

Inspector Williamson said: "We are moving away from the old style questioning: 'Where have you come from?', 'Where are you going?', 'What can you see?'.

"These questions take time and aren’t always that accurate."

He added: "The control room staff that have used what3words for an emergency call have said how easy it is, and they were able to find the location a lot quicker than they previously would have."

Police and crime commissioner for Lincolnshire, Marc Jones said: "This innovation is another huge step forward in our efforts to keep the people of Lincolnshire safe.

"We have already invested in a cutting edge command and control system and, along with this new app, will mean the force can get the right officers with the right equipment to the right place quicker than ever before.

"It is another fine example of how Lincolnshire is using innovation to create a 21st Century police force equipped with the best technology to protect communities and residents."

Co-founded in London in 2013 by Chris Sheldrick, What3Words is a simple way to talk about location. The system covers the entire world, never needs updating, and works offline. A 3-word address is a human-friendly way to share very precise locations with other people or to input them into platforms and machines such as autonomous cars or e-commerce checkouts. It is optimized for voice input and contains built-in error prevention to immediately identify and correct input mistakes.