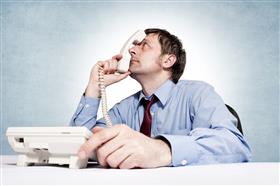 It appears many gave up in frustration after below-average staff levels led to far longer wait times than usual.

Staffing was so low that nearly 700,000 people, equalling 40 per cent of total calls, were disconnected before they even entered the calling queue.

National Party Tax spokesperson Andrew Bayly said the Government should have boosted staff levels at the call centre over this period, especially as it had sent out roughly 1.2 million letters to people telling them to get in touch over matters relating to the tax treatment of Working for Families or Kiwisaver.

IRD faced repeated criticism last year for worsening performance at its call centres, with wait times of over 1 hour and 45 minutes.

He said the problem was clearly to do with staff levels, which were higher when National was in government.

IRD received a similar number of calls, but was able to handle them much quicker, likely because of additional staff. There were 1.4 million calls to IRD in the four months to 30 September 2017 versus 1.7 million in the same period of 2019.

When National was in government in 2017, 686 people were called in to staff the phones. Only 400 were asked to do so in 2019. It appears this was the reason for far longer wait times and much higher rates of disconnection. Only 15.5 per cent of calls in the four months to 30 September 2017 were disconnected before reaching an operator, compared to 39.1 per cent in the same period of 2019.

Bayly said that Revenue Minister Stuart Nash should have beefed up numbers, especially as the Government was rolling out changes to the tax system through its business transformation programme.

IRD has acknowledged that the roll out of the business transformation programme did affect performance over this period.

"If i'd been a minister and I'd got a new project going on, what I might have said to the commissioner would be: how many people have you got manning the phones?" Bayly said.

"At times like June it goes berserk," he said.

The Government blames some of the delays on a trebling call demand earlier in the year.

In the first half of 2019, call volumes trebled from 200,000 to 700,000 because of an update to the IRD system that went live at that time. Some of those callers called the line because they received unexpected tax refunds as a result of IRD's new system.

"To deal with the significant increase in calls, Inland Revenue took on an additional 325 people to help and 900 staff were used during the peak period to answer calls," he said.

"Almost 700,000 calls were made to Inland Revenue in May alone. That's almost the combined population of Wellington and Christchurch," Nash said.

"I appreciate that it is frustrating for people when they can't get hold of Inland Revenue on the phone," Nash said.

"I encourage taxpayers to go online to see what new services are available. The call centre and front of house are also available for those who need it," he said.

More Editorial From The Inland Revenue