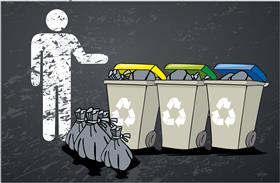 Gurugram, India, Feb 7, 2018 -- After receiving several complaints from residents regarding the mounting of garbage in their vicinity, the municipal corporation of Gurugram (MCG) announced a toll-free number (1800-102-5952) where complainants can call and report about garbage dumping or laxity on the part of the sanitation workers.

MCG officials told TOI that the number is of Ecogreen Energy Private Limited call centre, the agency responsible for door-to-door garbage collection, and will be operational 24X7. The officials added that the problems will be addressed within 24 hours of the complaint and the representatives would then take a feedback from the residents. "We have launched the helpline so that anyone who spots garbage dumps, can report it to the agency. Following which, action would be taken immediately," said Nar Hari Bangar, additional commissioner, MCG.

He added that this is an effort to make Gurugram a cleaner city. In order to promote waste segregation, two types of dust bins — one green and one blue — have been placed across the city. This would make treatment of waste a smoother process.

Meanwhile, the MCG officials requested residents to use the Swachhta app to report any sanitation related issue.