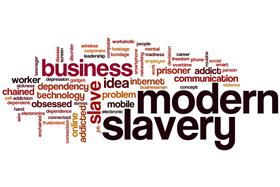 London, UK, Aug 2, 2018 -- MP Recruitment, part of the services contractor Cordant Group, has teamed up with the charity Unseen to launch a new campaign to raise awareness of modern slavery across the labour and supply chain industries. As part of the ‘Be Seen, Be Heard’ movement, PMP will be encouraging its workforce and others to wear high visibility jackets with Unseen’s Modern Slavery Helpline number. The UK-wide Modern Slavery Helpline is independent, confidential, 24/7, 365 days a year, and calls can be taken in 70 languages.

The three-month campaign coincides with World Day Against Trafficking in Persons. PMP’s employees plan to share campaign materials with industry contacts, including order forms for the specially-made jackets and other merchandise, including wristbands, key tag fobs, hairnets, posters, snap bands and pens. Companies can use the forms to order and pay for the merchandise themselves, with 10pc of the total order value going to Unseen.

PMP will also be hosting a roundtable discussion in September, which will include a guest speaker from Unseen. At a social media campaign on Thursday, October 18, Anti-Slavery Day, participants will be asked to share pictures of themselves wearing their jackets and other merchandise, whilst using the #BeSeenBeHeard.

Jamie Reynolds, Managing Director, PMP Recruitment, said: "Modern day slavery is the fastest growing international crime and is estimated to affect over 40 million victims globally, of which 21 million are victims of forced labour. It is our ambition to have workforces up and down the UK to proudly wear these very special high visibility jackets. Not only do they encourage people to use the Helpline number, but they also promote the message that any form of human trafficking or forced labour is completely unacceptable."

Andrew Wallis OBE, CEO of Unseen UK, said: "Unseen is incredibly proud to join forces with PMP Recruitment in our shared mission to tackle modern slavery. By raising awareness of the Modern Slavery Helpline, the campaign will directly impact the lives of those who are being exploited, helping them to escape their situation and regain their independence. I am impressed by PMP’s genuine commitment to increasing understanding of forced labour in the sector and it’s great to see them encouraging others to follow suit."

PMP entered a year-long partnership with Unseen to raise vital funds and donate supplies for the victims of modern slavery by promoting monthly fund-raising. First, PMP employees, with the help of clients and suppliers, put together 400 survivor kits for victims. The company raised over £12,500 after hosting a family day in Stoke-on-Trent in June.