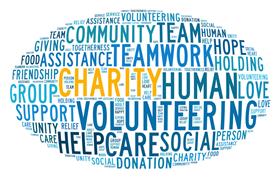 Yorkshire, England, Nov 20, 2018 -- Contact centre Echo-U has continued its CSR drive in the region by supporting North East suicide awareness charity, If U Care Share Foundation and its Inside Out campaign. The firm, which is located in the heart of Newcastle’s quayside, has raised £500 for the charity through a variety of fundraising activities.

Launching in 2014 to mark Worldwide Suicide Prevention Day, the Inside Out campaign from If U Care Share Foundation aims to raise awareness of the importance of talking and encourage more people to start a conversation.

The campaign struck a chord with Echo-U’s head office team in Newcastle, prompting the decision to raise money for the charity internally. Staff members hosted a dress down day, with everyone turning a piece of clothing inside out for the day, and also held a raffle with a mixture of prizes ranging from sweet hampers to a Beamish Wild day out. Co-founder and joint managing director, David Blakey, also contributed to the fund to increase the donation amount overall.

David Blakey, co-founder and joint managing director, at Echo-U, said: "CSR is extremely important to us at Echo-U and we are lucky to have a team who are always willing to raise money for charities in the region.

"The Inside Out campaign is a vital message to raise awareness of suicide in the North East and the importance of starting conversations. We’re really pleased that we are able to contribute to such a fantastic cause."

The journey of the If U Care Share Foundation began in 2005 when 19-year-old Daniel O’Hare took his own life. In an attempt to do something positive from the tragic incident,Daniel’s brothers Matthew and Ben along with cousin Sarah, who were then aged 10, 5 and 13, started If U Care Share and created wristbands to encourage young people to share their problems.

The children soon received support from Samaritan and family friend Suzanne and through fundraising and raising awareness, they eventually raised £48,000 which went in to young people’s projects in the North East.

Dominic McDonough, fundraising and events manager at If U Care Share Foundation, said: "We cannot thank Echo-U enough for this amazing donation to If U Care Share. We are only a small charity but donations like this enable us to make a big difference in our communities.

"We are also delighted that Echo-U has encouraged their staff to talk about their feelings and talk about suicide, starting a conversation about this incredibly important issue.

"The money raised will help us to save lives across the North East and support those bereaved by suicide. The North East has the highest rate of suicide in the country but we are working hard to change that, generous donations such as these bring that a little bit closer to reality."

Today's Tip of the Day - Benefits Of Certification