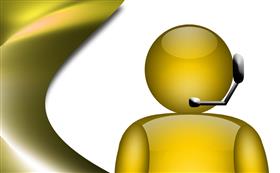 Bristol, UK, April 2, 2020 - Staff at an NHS 111 call centre rang police to complain they sit less than a metre apart — with some branding it a "virus factory".

One is said to be off sick with symptoms after concerns about social distancing and a lack of clean surfaces "fell on deaf ears".

Two cops visited the Teleperformance base in Bristol at 2am on Monday.

Up to 50 people on temporary contracts work on each shift.

An insider said: "The officers told bosses we had to distance ourselves, but as soon as they left it was back to normal.

"It’s terrifying — a virus factory. We are risking our lives."

The insider claimed there is no deep cleaning and that break rooms get crammed.

They added: "It is the space between the computers that has become the main issue.

"People are coming into work in latex gloves and masks, it’s really that dangerous, without social distancing or proper cleaning."

Bosses have allowed daytime staff to take office computers and work from home, but it has led to a reduction in properly spaced out work stations for night staff.

Staff are paid £15 per hour and are expected to wipe down their own workstations using antibacterial wipes.

Avon and Somerset Police said: "Police attended a call centre in Bristol at about 1.50am on Monday 30 March in response to a report from a member of staff raising concerns about social distancing.

"The officers attended and gave advice to management before resuming patrol.

"Officers recommend that those with concerns about safe working practices report their concerns to the local authority.

"Employers who have people in their offices or onsite should ensure that employees are able to follow Public Health England guidelines including, where possible, maintaining a two metre distance from others, and washing their hands with soap and water often for at least 20 seconds (or using hand sanitiser gel if soap and water is not available)."

Today's Tip of the Day - Look After Your Agents