News : Not 999: Police Slam Call to Attend 'if Something Might Happen' 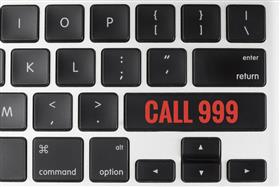 West Yorkshire, UK, Nov, 2020 -- Someone rang the 999 emergency line...because they wanted to police to attend an address ‘in case something happens'.

But people who lose their property were instead re-directed to the reportmyloss.com website.

Recently, the contact centre revealed someone called 999 to ask them to book some driving lessons for them and another called after they lost their mobile phone.

Today's Tip of the Day - Factors When Considering IP