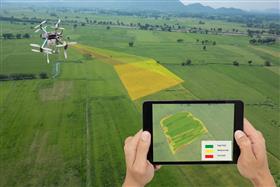 Osogbo, Osun, Nigeria, Aug 1, 2018 -- The Government of Osun State in South Western Nigeria has announced that it is set to deploy unmanned aerial vehicles (UAVs) or drones technology that will help tackle the lingering crisis between herders and farmers in its farming communuities and prevent loss of lives.

Commissioner for Innovation, Science and Technology, State of Osun, Engr. Oluremi Omowaiye revealed this at the just concluded ICTEL expo 2018 in Lagos.

"The State, will in the coming week, launch unmanned aerial vehicles (UAVs), commonly known as drone as a monitor tool to track movement of live stocks in the State," he added.

He added that to make this possible, the State has built a call centre and obtained a Short Code from the Nigerian Communications Commission (NCC) which farmers and other residents can use to track the movement of live stocks in the environs.

Our Correspondent gathered that the ongoing conflict between farmers and cattle herders is costing Nigeria at least $16 billion in potential revenues annually. … Farmers have accused the Fulani herdsmen of failing to control their cattle and of damaging crops. In turn, the Fulani accuse farmers of stealing their cattle. With an estimated death toll of approximately 2,000 to 3000 between 2016 to date, the clashes are becoming as potentially dangerous as the Boko Haram insurgency in the north-east. Yet till date, responses to the crisis both at the federal and state levels has been poor.

The GPS technology will result in significant advances in the ease and flexibility of studying animal movement patterns, yet removing the barriers remain to identification as each live-stock shall become trackable.

The State of Osun developed low-cost and logistically simple approach solution shall be deployed among small and inexpensive GPS units to monitor cattle movements and habitat use and to assess the impact of cattle grazing on farmlands, he said

So, we commend NCC for living up to expectations, he said, adding, "when we started putting up an inquiry and call centre the need a short code arose; so that it will be easy for people to call. We approached NCC for a 3-digit short code which we are going to make a toll free line. NCC supported us. We are going to commission it next week".

He also hinted on the State’s Industrial park, thus, "We are looking at building an industrial park. So that we won’t have some of these infrastructure scattered all over the State. We are discussing with some Chinese investors on the part. When that is in place you will have ICT centres and other infrastructure in there", Engneer Omowaiye said.

Engr. Omowaiye, also spoke on the impact of NCC’s short code on the project, adding, "we are launching some unmanned aerial vehicle that will interface with our call centre. Through that platform, we want to ensure that all live-stocks will have an ID. So, when the live-stock comes to your farm, all you need to do is text the first three digits to the short code; once you do that you get a response from the call centre on who owns the live-stock. From the call centre, the owner will also be called.

"Apart from that, we are also going to use it for other services like ambulance services, because in the call centre you have linkage to the Army, the Police, and the security operatives".

He said that the infrastructure to support the initiative has been developed by the State Government in partnership with other the private sector.

"We have done a lot; we have the infrastructure. We are working in the area of power; of course, the major challenge IT has in Nigeria is power. So, we are working on power generation in the State", the Commissioner said.

Former President Olusegun Obasanjo was reported to have said that President Muhammadu Buhari speaks from both sides of his mouth as regards death of many Nigerians in the hands cattle herders.

Tribune quoted Obasanjo as saying that Buhari had consistently dodged the issue of Fulani Herdsmen who were responsible for the death of thousands of Nigerians.

The former President stressed that Buhari’s body language towards the activities of herdsmen was making the job of security agencies difficult.

Obasanjo was quoted as saying, "He (Buhari) often speaks from both sides of the mouth on the issue of armed herdsmen killing of innocent citizens. At times, he would say the herdsmen are not Nigerians; that they are from Niger, Mali, Chad and other neighbouring countries.

"In the same breath, the president would say we should learn to live and cope with our neighbours, talking of the Middle Belt groups and that the crisis is an internal matter.

"At another time while in the United States, he said it was the fighters from Libya that were behind the killings. So, if the Nigerian military were to act, it will be against the position of the president. Therefore, the military had to be careful."