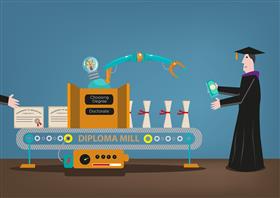 Dubai, UAE, Sept, 2018 -- The long arms of the law have finally caught up with the man who built an empire by selling fake degrees worldwide.

Shoaib Shaikh, the owner and chief executive officer of Pakistan-based IT firm Axact, was arrested by the country’s Federal Investigation Agency (FIA) after he was summoned by a local court for a hearing.

The arrest came 82 days after a district and session court in Islamabad convicted Shaikh and 22 of his close aides in the $140 million (Dh514 million) fake degree scandal and sentenced them 20 years each.

The convicts have also been fined Rs1 million each.

Axact offers a lifestyle that is at par with the salary & benefits provided to Axactians, as they can enjoy a wide range of world class facilities (both in-house & external)