News : Pakistan Sets Up Unique Helpline for Women in Need 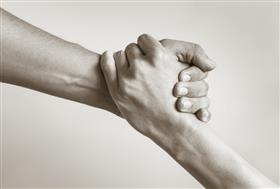 Peshawar, Pakistan, Dec 17, 2019 -- When Durdana married for a second time and to a man of her own choosing, her parents threatened to kill her if she tried to see her new husband. They imprisoned her in their home, but she still had her mobile phone and had learned that a helpline for women had been set up. She noted the number and then one day when she was alone in the house, she called.

Nayab Hassan was on the other end. She had been trained how to answer the call. "Be gentle. Listen. Let them speak. Let them tell you what they want. Sometimes they are very emotional," she said at the helpline center – located in the sprawling provincial parliament buildings in Pakistan‘s deeply conservative Khyber Pukhtunkhwa province, where tribal councils still hand over young girls to settle disputes.

Not far from the border with neighboring Afghanistan, Khyber Pukhtunkhwa became the first province in Pakistan to set up a hotline for women that feeds directly into the provincial legislature.

It‘s still a small operation. It began March 1 and so far there are only two operators, Hassan and Mehran Akbar. They take the information from the women and Shandana Naeem, a lawyer, follows up with advice and a network of free legal services.

They keep a careful log of all their calls, which average one a day so far, and while most have emanated from the provincial capital of Peshawar, several have come from more remote regions.

Durdana‘s call was from Swat, a picturesque mountain region of clear blue lakes that ramble through valleys surrounded by imposing peaks. The area‘s beauty is a stark contrast to its dark and violent history. It was in Swat where Pakistan‘s Taliban briefly ruled, beheading police in the town square and where Malala Yousafzai was shot in the head for advocating girls‘ education and criticizing the violent religious radicals as being frightened of female education.

The log book is carefully kept. It records names, dates, phone numbers and then their stories. Some are horrifying.

One woman, Aneesa, called to say that two years earlier her husband had thrown acid at her, stole her money and jewelry and fled to Saudi Arabia. She had moved in with her parents and now her eyesight was deteriorating from the acid attack; she needed medical assistance but had no money to pay for it.

Naeem said they helped her work through the red tape of getting a health card, the first step to health care. But Aneesa‘s call also made them realize the need to engage local health clinics and develop a network that would be willing to offer free health care, similar to their legal service network.

Naeem said most of the calls have been over property disputes, where women were being denied their inheritance.

The helpline was developed by Meraj Humayun Khan, a 70-year-old parliamentarian who has taken on her male colleagues to organize a women‘s caucus in the provincial parliament. With the weight of the 22-member caucus behind her, Khan lobbied for the direct helpline to the legislature.

"We need to be in touch with their issues," she said in an interview. "I can have a lot of ideas but it should come from them."

The original call that prompted the helpline was a property dispute, said Khan, explaining that Pakistan‘s inheritance laws – based on Islamic injunctions – allow male relatives priority and give a lesser share to women. And those women are often denied or intimidated by male relatives to forfeit even that lesser share.

The reason for locating the helpline in the provincial parliament was to collect data from women that would in turn bolster arguments for legislative changes. Khyber Pukhtunkhwa province is already behind on women‘s right issues; lawmakers there have so far refused to pass an anti-domestic violence law that other provinces have approved.

Hard-line religious parties hold significant sway in Khyber Pukhtunkhwa. Jamaat-e-Islami and the Jamiat-e-Ulema Pakistan (whose madrassas or religious schools were favored by Afghanistan‘s Taliban) are partners in the provincial coalition government.

The 22 women in the provincial parliament are there on quota seats reserved for women. No female candidate has been able to win a general election seat in the deeply conservative and tribal-dominated province.

Khan says she plans to run on a general seat in the 2018 elections, but she admits even those men who have championed and endorsed her candidacy have been met with skepticism and resistance.

"Everyone they talk to asks ‘That‘s all well and good, but don‘t you have any men who can run?‘" she said. "It‘s a humiliation for them to be represented by a woman. They think women don‘t know anything about politics, about economics."

Yusuf said that despite the legislative progress, on-the-ground enforcement of these new laws still remains a significant hurdle.

"I think the governments are realizing it‘s about time something needs to be done," she said in a telephone interview. "Laws were passed last year, the honor killing bill, rape, violence against women, but still it is about enforcement."

In Pakistan it is difficult to even get the police to register a case of domestic violence, said Khan, who explained they often see it as a private family issue.

Durdana in Swat, whose family threatened to kill her if she met her husband of choice, was told to go to the police station and charge her parents with unlawful confinement or tell her husband to go to police to demand he be allowed to see her, said Naeem, the helpline lawyer.

That was March 6. Naeem has tried repeatedly to telephone Durdana on the number she gave but it is either turned off or rings unanswered. The dilemma, she says, when giving advice is that there is no way to know whether the police, for example, will help the women or hand them back to the family they are fleeing.