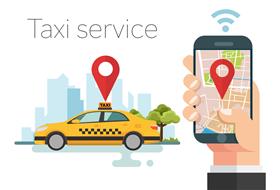 Dubai, UAE, Aug, 2019 -- The phone booking system for Dubai taxis will be phased out with the Roads and Transport Authority (RTA) expanding the fleet of taxis providing e-hailing service, a senior official said.

At a press conference to announce the official launch of Hala, a company providing online booking service of Dubai taxis that piloted through ride-hailing firm Careem’s App in July, a senior official said that RTA will phase out the phone booking service for taxis.

"The RTA call centre will continue to operate. But, eventually we will phase out the phone booking service for taxis," Ahmed Hashim Bahrozyan, CEO of Public Transport Agency at the RTA, said in response to a question by Gulf News.

"We are encouraging the people to download the app. Over time, as we start getting more people [booking taxi] through the app, we will phase it [phone booking] out. But we are not going to close it down immediately."

With the official launch of Hala in September, as many as 5,500 taxis, almost 50 per cent of the total fleet of Dubai taxis run by seven franchises, will offer the e-hailing service through the app.

Hala plans to cover the whole fleet of taxis in Dubai under its platform by the beginning of 2020, said Clemence Dutertre, Hala’s CEO.

"We are tailoring the number of taxis that are available on the platform according to demand and ramping up... The objective is to have all taxis on the platform by the beginning of next year," she said.

The online booking service is expected to benefit visitors to Dubai for Expo 2020.

Initially, 550 taxis will be branded with Hala wrap and the branding will be expanded later.

Bassel Al Nahlaoui, managing director of Careem Gulf and Pakistan, said the company has a mission to expand the similar model of service in other emirates in the UAE and in the region.

Through Hala service, which is optional on the Careem App, residents and visitors will be able to find the closest Dubai taxi available, see a fare estimate and time of arrival before booking their ride and connect their credit card for easy, hassle free payment via the app, he explained.

Prior to the launch of Hala, the joint venture of RTA and Careem that piloted with 2000 Dubai taxis in July, taxi booking through the number 04 2080808 used to take up to 10minutes, officials said.

Though the ambition was to cut it down to less than five minutes, Hala has achieved an ‘expected time of arrival’ of 3.5minutes during the pilot phase, Dutertre claimed.

However, Bahrozyan later pointed out that the pilot period was during summer months when many residents were away on holidays and the ETA is likely to go up when there will be more demand for taxi e-hailing after residents return from their vacation.

"We have integrated the Careem system into the RTA system which means all the RTA features including the cameras to monitor the safety in the cars remain. These cars in the fleet will continue to provide street-hailing service as well," he added.

Hala users will also be able to avail the other benefits offered on the Careem App such as food delivery service and loyalty programme rewards.